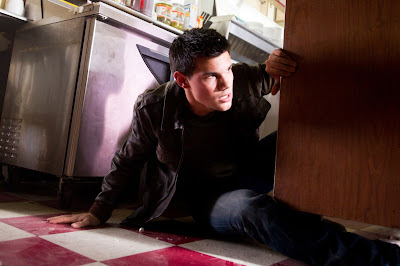 Team Jacob fans rejoice, there's a movie out that features wolf pack boy Taylor Lautner in his own starring feature. Under the direction of action movie master John Singleton with a script by Shawn Christensen, and surrounded by name actors, Taylor is able to boost his teen appeal beyond the Twilight series. Playing Nathan Price a high school student who suddenly finds out this his life has been a lie, he is on the run with his girlfriend Karen from enemies unknown.

Nathan is a reckless, athletic, and otherwise typically awkward teen who loves to party like the best of them. He lives with his folks Kevin and Mara (Jason Isaacs and Maria Bello) in a Pittsburgh suburb. He also sees a psychologist Dr. Bennett (Sigourney Weaver) for insomnia and these disturbing reoccurring dreams. His dad puts him through some strenuous fight training, especially after he's caught waking on the lawn after a party. Kevin keeps stressing that no matter what, Nathan must use his brain and instinct to overcome all unexpected situations. Oh, and he's grounded for 2 weeks.

A school assignment pits him with the lovely Karen (Lily Collins who will be seen next in Snow White). They have been neighbors for years and Nathan has a secret crush on her. The school work is to do a report on missing children. They find a site that ages a child to what they would look like years later. Nathan finds a kid that looks like him and when aged is a dead ringer. Confused, he finds the same shirt in their storage. Lily poses why there are no pictures of Nathan before he was 3 years old. The hit on the website rings alarms on some government computers and some others unknown agency that are also listening in. Soon Nathan's house gets some unexpected visitors and his dad telling him to run. Trained agents are after him and he doesn't know who to trust except for Karen. There's Frank Burton (Alfred Molina) the CIA agent who is purring to help him come in and there's Viktor Kozlow (Michael Nyqvist from the Girl With the Dragon Tattoo) as the Euro evil assassin. Victor assembled a small army of leather jacketed henchmen who seem to take out the CIA agent without too much problem.

At 19 years old, Taylor has some kids TV programs and the Adventures of Sharkboy and Lavagirl on his resume. The Twilight series has catapulted him to to the limelight that this action role that will be sure to bring out the target audience that will enjoy the Jason Borne the teen years escapades. It shows off Taylors' years of training that earned him gold medals as a youngster. His idol status will hopefully not get in the way of long film career, but before that happens, he needs to find another projects that doesn't depend on wires and special effects. Like his co-stars Kristen Steward and Robert Pattinson, he will have to make some better and more interesting choices for his next project.

Singleton hasn't directed a film in six years, the last one being Four Brothers in 2005. The action shots are well executed and exciting. The pacing moves along nicely with only a few patches along the way. One really wants to like this movie, and it does what it's supposed to do. The young people are as likable and pretty as they can be just wish they were better at it.
(Review by reesa)