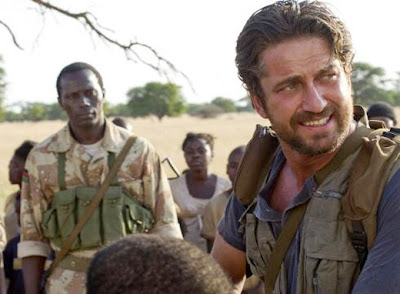 Fresh out of prison, Sam Childers returns to his trailer park home where his wife, child and mother greet him. They don't have any smokes or beer and his wife has a real job now and no longer a stripper. The tightly wound Sam blows up when he discovers this new lifestyle is because his wife found God. He takes off for a night of boozing, drugs and violence. Waking to the reality that he may have actually killed someone, Sam asks his wife for help. Their church provides a born again attitude in Sam and now he's on a righteous path.

Gerard Butler plays the teeth gnashing Sam. His conversion as a born again turns him into a considerate, hard working husband to wife Lynn (Michelle Monaghan) and father to Paige (Ryan Campos/Madeline Carroll). A guest speaker at their church tells of the blight in the Sudan that is displacing it's populace. Sam who now owns a construction company decides to go there to help rebuild. Once there he wants to visit the countryside of the north where most of the fighting is taking place. He befriends the local freedom fighter Deng (Souleymane Sy Savane) who takes him north where he encounters the horrific effects of the war done to the people and the misplaced children whose villages have been burned and their families murdered. He also witnesses the physiological damage to the young boys who are forced to kill their parents and take up guns as rebels.

Sam returns home to Pennsylvania determined to do something to help. He decides to build a church and a orphanage in the northern war zone. When the LRA attacks he also takes up arms to defend the kids. Soon he's known as the white preacher whose reputation puts a price on his head. He also builds a church for those displaced at home. Soon he's the one preaching. Flying back and forth from the states and Africa takes it's toll on his family and his finances. Asking for help from local businesses that can not relate to events happening beyond their world. Sam's frustrations increase until he begins to lose his faith. After the overdose of his friend Donnie (Michael Shannon), Sam sells off his construction business and leaves his family to start a one man war on the LRA.

Director Marc Forster of Finding Neverland and the Kite Runner works from a script by Jason Keller which rushes through the events that shaped Sam Childers and focuses mostly on what one man had accomplished. The title of the film has a grindhouse movie flavor but it's nothing like you would expect. Sam's story begins in 2003 but outside of the daughter aging from a child to a teenager, there's no sense of time frame. The beginning of the movie is like a Cliff Note version of his life: prison guy, angry guy, maybe murdering guy, repentant guy, saved guy, working guy. One day he tells his wife he wants to go to Africa for a few weeks, and she says yes, you should do that. Done.

The filmmakers contrasted the difference between the two realities of Lynn shopping in a supermarket full of food, and Sam living in the camp with many hungry children. Sam shows pictures of the injured children to raise money from a car dealer who invites him to a party at his lush house with tons of excess. The violence perpetrated on the upon the region is graphically detailed. There were some families that brought young children to the screening which was probably ill advised. Hopefully they would be able to discuss with them and perhaps encourage them that they too could make a difference. Although the film plays like a propaganda film to raise funds for Childer's charity, one cannot deny the fact that awareness needs to be focused on these atrocities.
(Review by reesa)