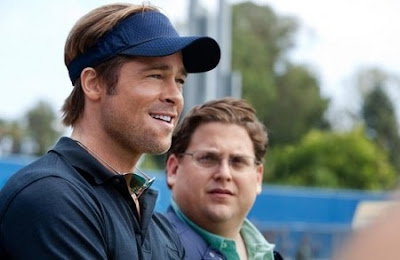 National baseball team franchises are run like everything else in this world by the bottom line. The popular team has the big money behind it to offer the best players the largest inflated salaries. Scouts who are responsible for finding new talent are outbid by teams with better offers. The General Manager barters and trades players like commodities. When the GM for the Oakland A's suggests a new way of rebuilding his team, it ruffles the feathers of the ways things have been done over the past century of baseball. It also eventually changed the way the owners and managers do business.

Billy Beane (Brad Pitt) was a promising ball player that was headed to a full ride at Stanford when scouts came calling offering him a career if he signed with them now instead of going to college. He choose the “show” a move that he may have regretted after his baseball career started to wane. He became a scout for the Oakland A's working his way up to the position of General Manager. After the A's budget was reduced during a losing year he brings on a special assistant that he stole from the Cleveland Indians. In his first job after graduating from Yale Peter Brand (pseudonym for Paul DePodesta played by Jonah Hill) is now he's on the way to the bay area in California as the assistant general manager of the A's. He uses his computer analytical skills to assess the upcoming ball players and the present team on how they play the game. From studying how to pitch, hit and run, to which farm team players show the most promise even though their quirks keep them from being recruited by anyone else. Despite disagreements by long time scouts and the team manager Art Howe (Phillip Seymour Hoffman) the system seems to work and the A's go from losing everything to having the most wins in a row in baseball history.

Directed by Bennett Miller who replaced Steven Soderbergh when the script called for interviews with real life players. Soderbergh had replaced David Frankel due to scheduling with Contagion. The script was rewritten by Aaron Sorkin then by Steven Zallian. Money Ball offers up one of the best movies about behind the scenes of baseball that even non fans can appreciate. Pitt who fought tooth and nail to bring the book by Michael Lewis to the big screen gives a fine nuance performance. Like Robert Redford he's is blessed with boyish good looks that cannot be defeated while trying to look “normal”. His Billy is confident, hyper GM who believes that not being friends with the players will keep him from feeling bad when he has to send them back down or trade them. Aspects of his job are relayed in the his training of Peter who is given the task of telling a player he's not playing that day and on his way to another team. Smart, funny, informative and entertaining would not be the first thought regarding a movie about baseball, but this one hits it straight out of the park.