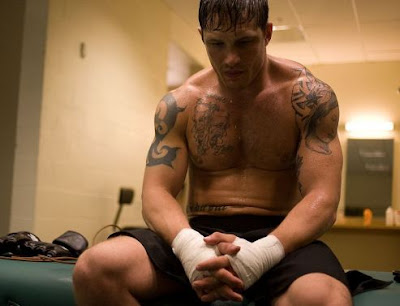 September is neither summer blockbuster nor fall/winter Oscar potential time for movie releases. Therefore Warrior will hopefully have a well deserved chance of dominating the theater screens as the sleeper hit of the year. A well tuned story of estranged brothers who are Mixed Martial Arts (MMA) fighters that will battle for a world title. A taut well acted emotionally riveting story that exceeds the Rocky-esque genre to a whole other level.

Thomas Hardy had found mainstream attention through Inception and will soon be seen as a villain Bane in The Dark Knight Rises. He plays Tommy Reardon who comes back to his childhood home in Pittsburgh after 14 years to ask his father to be his trainer. His dad Paddy (Nick Nolte) had trained him since the age of five to be an Olympic class wrestler. Paddy's alcoholism tore the family apart to the point where Tommy moved away with his mother and his older brother Brenden (Joel Edgerton) refuses to speak with his dad except through mail or the phone. Tommy has no desire to make amends with his dad and rebuffs Paddy's 1000 day sobriety. Tommy's stint in the Marines is the only thing that he considers family. On the other side of Tommy's sullen loner wolf is Brenden, the happy family man with his high school sweetheart Tess (Jennifer Morrison) and their two young girls. He used to fight for the UFC (Ultimate Fighting Championship) and now works as a high school physics teacher. They have hit on hard times and it looks like their dream home is facing foreclosure. To raise some money Brendon does a “smoker” a parking lot fight, which causes him to lose his teaching job. The only way out is to train for Sparta a winner takes all fight with a $5 million purse. It's a championship that will bring together the best of the MMA fighters for the ultimate showdown. Unbeknown to each other that they are training for the same fight.

The trailer for this movie doesn't do it justice. The whole gist of the story seems like a rehash of everything you may have seen before only using better actors. Yes, it can be predictable, but don't be fooled. The pacing, the storyline, the unique camera angles by cinematographer Masanobu Takayanagi give you the perspective of being up close and personal to the lives of these three damaged people. One feels like a voyeur peering over the shoulder or looking through the wires of the caged arena. The use of the TV commentators narrate the action in the typical hype camouflaging the turmoil happening behind the battles. The musical soundtrack by Mark Ishman emphasizes the powerfully emotional climatic scenes but without the distracting radio playable theme song. Paddy's audio book of Moby Dick frames the metaphor for the characters' unbridled natures by fighting the way the world is set up, thinking they can subdue the chaos.

Director Gavin O'Conner retold the story of the 1980 USA Olympic hockey team's gold medal win in Miracle. He's also explored the complicated family of New York City cops in the gritty Pride and Glory. O'Conner wrote the screenplay with Anthony Tambakis and Cliff Dorfman using the combination of one of the fastest growing sports and a extremely dysfunctional family dynamic on the verge of imploding. The performances by all the actors involved are amazing, but most particularly Nick Nolte whose own troubles with abuse make the repentant Paddy Conlon so raw and real that it should be awarded with a supporting actor nod. Then there's the actual bouts. The Warrior will do for MMA fighting what Raging Bull and Rocky did for boxing.
(Review by reesa)