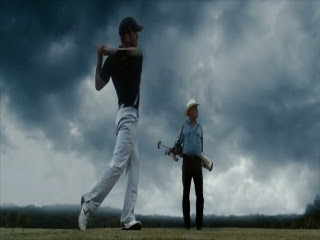 Luke Chisholm is returning back to Waco after having a major melt down at a recent amateur golf tourney. He's angry, frustrated and distracted by a guy putting up a golf flag in a cow pasture when he almost hits a bull in the road before crashing into a fence. The owner of the property rides up on his horse and offers him first aid and a place to stay while his car is repaired.

Luke's dad has taught him golf since he was a youngster with a domineering determination, an ambitious attitude and “no one remembers the losers” philosophy. Having lost concentration by the presence of a tough competitor on the green, Luke makes a series of mistakes, exacerbated by his caddy dad's berating who then walked away in a huff. Luke snaps his putter in half and tosses it into a pond that's all caught on TV cameras and broadcast to the world. Including the residents of Utopia, TX (Population 375 because twins were just born) where he is stranded after his accident. Fortunately for Luke, Johnny Crawford (Robert Duvall) takes him under his wing. The guy owns the quaint picturesque Whispering Inn and he just happens to have a golf course there. Johnny was once a pro, had some problems, came to Utopia and stayed with a friend who later passed from cancer. He remains close with his friends wife Lily (Melissa Leo) who runs the local cafe and her daughter Sarah (True Blood's Deborah Ann Woll) future horse whisperer. Sarah is immediately smitten by Luke much to the chagrin of cowboy Jake (Brian Geraghty). Johnny feels Luke's pain and offers to help him find his game in the 7 days it takes to get his car fixed. Johnny is like the Mr. Miyagi of golf. He tutors Luke to find his conviction through SFT. Seeing, Feeling and Truth. Instead of “wax on wax off” Luke is given exercises in writing about his golf process, fly fishing, pitching horseshoes, painting, cowboy poker and flying a plane. Along the way he chastely romances Sarah, engages in machismo male posturing and bonding with the locals, confronts his fears and issues he has with dad and ultimately himself.

Based on a book by David L. Cook who also co-wrote the screenplay with Rob Levine, Sandra Thrift and the director Matthew Dean Russell. Russell a veteran visual effects hand does fairly well with his first feature film but has a feeling of indie all over it. The film relies heavily on Duvall filling the screen with his sage and homespun aphorisms to the bitter Luke who quickly submits to his teachings. These two actors were last seen together in Get Low. There's a heavy...and by heavy as in 2x4 across the head...Christian conversion theme going on, including a song with the lyrics “born again” as Luke finally “gets it”. The final golf tournament using real life Golf Channel commentators and golf pros Rickie Fowler and KJ Choi builds the only real tension in the film even though viewers will pretty much know what will happen. Still the filmmakers decided to put a WTF ending by offering a website to find out the result.
(Review by reesa)

Email ThisBlogThis!Share to TwitterShare to FacebookShare to Pinterest
Labels: 7 Days in Utopia review