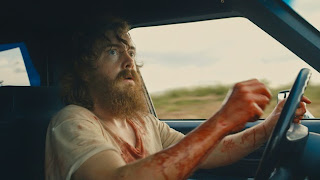 I’ll admit the pre-screening buzz on this one was mighty impressive. Some big wigs in the reviewing biz were sparking pretty brightly about how awesome Blue Ruin was to experience. One even went so far as to say it is the best film of 2014 by far. It runs 92 minutes and was written, directed AND photographed by Brooklynite Jeremy Saulnier (MURDER PARTY). It was awarded the FIPRESCI Prize in the Director’s Fortnight program at Cannes 2013 and has won a handful of film fest awards since. The making of the film was a family effort which included friends and relatives. Grass roots at its best, it even involved the use of the director’s parent’s home and beat up old Bonneville, both essential parts of the film. It was filmed in 30 days and across four different states. This film is about the story and with four pages of post-production personal thank yous, it is indeed birthed of collaborative effort.

I think everyone at one point in their lives has imagined a revenge fantasy for a perceived wrong done to them so every viewer should have an identity link to the plot. This story centers on a revenge plot focused on the murder of protagonist Dwight Evans’s parents. Dwight is homeless, turned inward over loss, and has emerged so traumatized that he can barely function in society anymore. He has chosen to live away from the fray in eastern Delaware on the shore near Rehoboth Beach, in his car. He forages for needs and the locals know and tolerate his presence. Eventually other facets of his character emerge to show the viewer that he really could have been any one of us after a PTSD inducing incident. The murderer (Kevin Kolack as Teddy Cleland) has been released from prison which sets Dwight into action and an emotional transformation that we feel he has just been biding his time for. His chance to get even.

The film is a director’s piece as it attempt to combine art house films of shock violence and the good old fashioned suspense drama, with a family tie. Director friend Macon Blair, from school days in Virginia, stars as Dwight. He did many of his own stunts and prepared for this character, through discussions over the course of a year. Saulnier describes Dwight Evens as a “kind hearted assassin who is thrust into a violent situation and comes face to face with his own ineptitude.” He says, “Compelled by love, fear and a distorted sense of justice, Dwight is a lost soul.” But one we can all relate to and come to care about. Hell hath no fury once Dwight’s sister Sam (Amy Hargreaves- HOMELAND) and her family become ultimately threatened. He is aided by high school friend Ben (Devin Ratray- HOME ALONE) who just happened to have an arsenal at his house.

The title caused me to watch closely at the cinematography and I have never seen such a creative use of the color blue in virtually every scene in the movie. Far beyond the requisite blue sea, sky and painted wall. Blue, in a small way, is in virtually every scene. The car, Dwight’s clothing, a small glow in the background, a prop, a curtain….. It not only references an emotional state of being, it haunts each frame. Dwight is not a war vet or retired cop, adept at warring. He is an everyman, who doesn’t plan things out and occasionally messes things up. And we do care about him as the sympathetic character that he is. He is the outsider to the Cleland family gang that we come to meet. The murdered has a large posse of friends and relatives….ones that could be your neighbors, shades of “Arlington Road”. The violence that ensues is not gratuitous but methodically portrayed, much as an artist would construct a canvas piece. Make up and effects man Toby Sells (THE WALKING DEAD, ZOMBIELAND) provided what was said to be the most expensive line item in the budget, the effects. They claim there is also computer generated enhancement but they dare you to spot it.

In the climactic ending, Eve Plumb (Jan from the Brady Bunch) makes a cameo as the Cleland family mom, Kris. So if you have ever wanted to see Jan shoot someone with a gun, here is your chance.
(Review by Cheryl Wurtz)