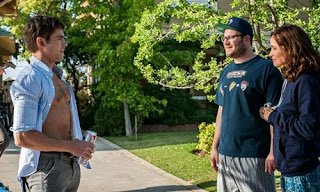 “Neighbors” as directed by Nicholas Stoller is about a young couple, Mac (Seth Rogen) and Kelly (Rose Byrne) who attempt to live in a nice quiet community to raise their baby girl. They get excited when they see the empty house to be soon be occupied by future neighbors. But to their surprise, the new neighbors turn out to be a hand full of youthful frat guys-Teddy (Zac Efron), Pete (Dave Franco), Christopher Mintz-Plasse and other friends.

The couple is surprised to see a bunch of frat young guys moving into the home, they go over to meet their new neighbors. They appeared to be friendly but in all truthfulness they wanted to get their point across about keeping the music down when they have their parties. Of course nothing goes as plan and as soon as the couple tries to sleep the music gets loud. Fearing that it will wake their daughter, the couple goes next door intending to stop the noise but easily get suck in to the party scene. One thing leads to another and the couple ends up spending the whole night partying with the neighbors.

Troubled by their lack of behavior the couple reiterated their stand on the loud music the next morning and Teddy promised that if the music gets out of hand for the couple to call him first, not the cops. But then second night repeats itself with the loud music. Again, the couple can’t sleep so they call Teddy to turn down the music. Teddy never answered the phone. The couple debated in whether the neighbors would know if it was them who called in on them. But they give in and call the cops. Just as predicted the cop comes out and spoke to Teddy regarding the loud music and the partying. When Teddy asked the cop in who called in on them the cop readily rat out their neighbors. Needless to say, as the story unfolds the couple breached the honor code (calling the cops). They became the enemies with the neighbors.

Teddy and his housemates staged a war to do everything from trashing their lawn, leaving condoms on the grass, cutting up their hedges in provocative displays, tearing out the airbags in the car, etc. When the couple tries to apologize they become the outcast with the neighbors. They attempt to reach out to other neighbors for assistance but Teddy and his housemate bribed the other neighbors towards their side. The couple goes to the University’s Dean to get assistance but the Dean failed to help. Feeling frustrated of their lack of support in the community and with the HOA, The couple gets back at them by staging a series of problems to get the neighbors to leave. The couple finally succeeded in getting the young frat guys out of their neighborhood.
S. Rogen and R. Byrne play their roles well as a frustrated parent could do, although some of the things were a bit excessive and unrealistic. It was interesting that the writers never included complaints by other neighbors. There are no police complaints or paper filed of being harassed. The writer tried hard to pull this movie together but the storyline just seem too unrealistic. It was hard to find the couple believable when they were doing things that most couples or neighbors would never do to get rid of their neighbors.

I find that Rogen plays in a lot of the comedy roles which are never funny and at times hard to take him serious as a parent in this role. For the average Seth Rogen’s fan this movie falls in to the weak comedy category.

Zac Efrom has played in a variety of roles but he lacked the character to make him stand out. More time was spent showing off his physique and his macho arrogance than anything else. His character failed to make that great impression. This movie had some funny moments. The couple’s little girl stole the movie. She was entertaining and more times than once brought out the natural side of the movie.

This movie is not suited for minor due to the nudity and the sexual content. For the fans of Seth Rogen and Zac Efron this movie falls into the category of a weak-comedy movie. The acting was a bit over the top and it lacked substance. I rate this movie a C-.
(Review by Dr. Dwanna Swan-Ary)