X-Men Days of Future Past 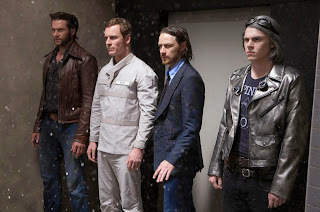 The mutants are back. In the seventh film in the X-Men series, which is based on the 1981 Marvel Comics Uncanny X-Men storyline “Days of Future Past” by Chris Claremont and John Byrne. The screenplay was adapted by Simon Kinberg and directed by Bryan Singer who also directed the 2000's X-Men and 2003's X2. The new movie acts as a sequel to 2006's X-Men: The Last Stand and 2011's X-Men First Class. It brings together the older versions of Magneto and Professor X with their younger 70's counterparts, with Wolverine thrown in for good measure. Plus a whole new crop of mutants and their unique powers. The number of characters cameos, the convoluted story that is too complicated and references made from other films makes for a movie that may be appreciated only by die hard fans. But will attract anyone looking for some cool scifi action/adventure.

Time travel devices in movies are always interesting as long as the paradox is treated with respect. The plot for the new X-Men involves the world in a dark grim apocalyptic chaos after the human/mutant war. Mutants are being wiped out by the Sentinels, a giant Gort like police robot whose main purpose is to defeat the mutants by countering their powers from the shape shifting DNA harvested from Mystique (Jennifer Lawrence). Charles Xavier (Patrick Stewart) has figured out that the war started from Mystique killing Bolivar Trask (Peter Dinklage) the military scientist that created the robots back in the 70's. Kitty Pryde/Shadowcat has the mutant ability to phase through solid objects as well as to move through time. She had never tried it longer than a week's travel and she's afraid that it would tear apart Professor X's mind. That means it's up to the indestructible Wolverine (Hugh Jackman) to inhabit his 70's self (including his hot naked backside shot), find Charles (James McAvoy) and Erik/Magneto (Michael Fassbender) to join together and stop Mystique from her single minded mission.

The early Charles has lost his powers from taking the drug developed by Hank McCoy/Beast (Nicholas Hoult) that keeps their mutant powers in check. It also has the side effect of making it possible for him to walk. It takes some effort convince the depressed professor and with the help of Pietro/Quicksilver (Evan Peters) they go to break out Erik from the cement prison under the Pentagon. Which turns out to be the best and funniest sequences in the film and probably the only scene that works well with 3D. Charles and Erik come to an understanding, but Erik still has an agenda which of course doesn't make their ultimate goal easy.

The story of the past is predominat as we are given glimpses of the future getting ready to be totally wiped out by hundreds of Sentinels. There's also Wolverine dealing with his pre-adamantium self which makes one want to revisit the other movies. In fact it's probably a good idea to watch the earlier films just for reference. If Wolverine is successful in stopping Mystique, then all the events in the previous movies will have ceased to exist and only he will be able to remember it. This may be like the alternate universe of the Star Trek reboot and favorite characters will be able to inhabit future films. The next in the series is called X-Men: Apocalypse (watch for a preview at the end of the credits), which sounds like even more mutant mayhem. Maybe you can't change the future after all.
(Review by reesa)

Posted by Dallas Movie Screenings at 10:14 AM

Email ThisBlogThis!Share to TwitterShare to FacebookShare to Pinterest
Labels: X-Men Days of Future Past review