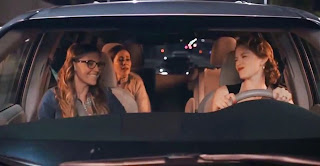 The new faith based comedy comes out just in time to honor all hard working mom's out there for Mother's Day. And like all typical films of this genre, it features a basically a one color cast (Caucasian) and over the top situations with a heavy doses of Godisms to give everyone a understanding nod and pat on the back. Directed by Andrew Erwin and Jon Erwin who also wrote the screenplay with Andrea Gyertson Fasfell, the movie features a group of mothers involved in a Hangover type evening that gets out of hand.

Allyson (Sarah Drew) is a stay at home mom with three children, a devoted husband Sean (Sean Astin) and is trying to write a mommy blog, but only has three followers at the moment. She's also a clean freak and salmonella phobic. When you have three kids, you have to get over it. Despite having a good thing going for some reason she is feeling frustrated and unsatisfied with her life. The daily stress of just being a mom is getting to her. Her husband agrees that night out with her best friend Izzy (Logan White) and the pastor's wife Sondra (Patricia Heaton) will curb the meltdown. But if it means she can't baby sit (again) for Sean's half sister Bridget (Abbie Cobb) who is starting a night shift job at the bowling alley. Sean and Izzy's fear obsessed husband Marco (Robert Amaya) are going to baby sit their collective brood with the help of Sean's single manboy bestie Kevin (Kevin Downes) who claims he hates kids. Sondra has a teen daughter who is protesting being a preacher's daughter and trying to go to a rave.

Anyone in Ally's mindset knows that spending some “me” time away from the kids means loads of guilt trips and separation anxiety. It doesn't take much for all the women to find excuses why they have to leave. Of course it doesn't bode will when the reservation at the restaurant was for the next week and Ally runs into Bridget's ex Joey (Harry Shum Jr.) who is supposed to be watching the baby. After Bridget finds out, the women since they can't have dinner go in search of the child who was left at the tattoo parlor, who in turn gave the kid to the care of Joey's ex girlfriend, and she went out drinking. The women are being driven around by a English accented cabbie (David Hunt) because the husbands decided to switch out the mini van after an accident by the husbands at the arcade. All the phone's are in the car, because Ally thought they should focus on the night, and not the constant calls from their families.

The set up is the women running around from place to place, everyone talking at the same time, husbands being as usual clueless men when it comes to kids, and a few words of wisdom from tattoo owner Bones (Trace Adkins) to calm the mess down. Sarah Drew is very good as the quirky overloaded mom, but at times you want to tell her to snap out of it. If you can deal with the sometimes heavy handed Jesus take the wheel moments, the misadventures of the moms is somewhat entertaining. And try not to ask why they couldn't have watched baby Phoenix along with the other kids, but then they wouldn't have a crisis for the story.
(Review by reesa)

Email ThisBlogThis!Share to TwitterShare to FacebookShare to Pinterest
Labels: Mom's Night Out review