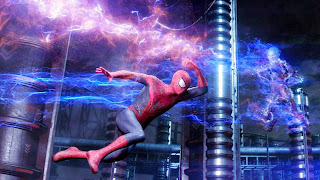 Director Marc Webb is back after the first re-imaging of Spiderman making us forget the Sam Rami trilogy that came and went with a over blown thud. Andrew Garfield proved to be a more worthy Peter Parker that felt more like the actual comic book character. The screenplay written by Alex Kurtzman, Roberto Orci and Jeff Pinkner fills in some of the questions about the blight of Peter's parents and services a bigger theme of love and acceptance over the CGI fights and special effects. The views of New York are spectacularly presented as Peter's POV shots flying from building to building to for an exhilarated effect. It's a big bloated production and way to long at 142 minutes.

Peter (Andrew Garfield) almost misses his graduation from high school because he in his alter ego form as Spiderman is busy saving New York from Russian bad guys trying to steal plutonium in a high speed chase through the city. He does miss his girlfriend's valedictorian speech during the ceremony. Gwen Stacy (Emma Stone and Garfield's real life GF) is a gifted scientist who is being offered a chance to go to Oxford in England. She is also working for Oscorp, the same company that Peter's father worked for at the time of his death (the beginning of the film does a redo of what happened to Peter's parents). Peter is also in a quandary and guilt over the death of Gwen's father in the first movie and the promise to keep her safe. Knowing his life is froth with danger, Peter unwillingly knows he has to let her go. Aunt May (Sally Field) is also feeling a little separation anxiety now that Peter has graduated and he's no longer needing her as much. She's missing her husband and trying to make ends meet on her waitress job sending her nephew to college while taking nursing classes. Everyone's got angst. Especially Max Dillon (Jamie Foxx) an electrical engineer at Oscorp who suffers from low self-esteem issues as people seem to ignore him. When Spiderman saves him one day, he boosts Max's ego to the point that he becomes a superfan. He also falls in a vat of electric eels and becomes Electro who after a series of misadventures and misunderstandings wants to destroy Spiderman. He's recruited by Harry Osborn (Dane DeHaan) who has come home from school to see his dying father. His father tells him that he's inherited a genetic anomaly that will kill him. Harry asks his old friend Peter to get Spiderman to give him his blood since he has healing properties. Peter who had discovered something about his own condition refuses, and Harry goes nuts too.

So in between the action set pieces, the story centers on love and betrayal from almost everyone involved in some way or another. Garfield and Stone have good chemistry and the movie revolves around their love me or leave me relationship. At times we are hit over the head with their love story so we know nothing good is going to come from this.

Despite the long running time, the movie will make money no matter what. Children will love it. It's just disappointingly uneven and unsatisfying. There are a lot of emotional moments (yawn), good special effects, and everything anyone would want in a superhero movie. Except the extra scene at the end of the credits. You don't have to wait for it.
(Review by reesa)

Email ThisBlogThis!Share to TwitterShare to FacebookShare to Pinterest
Labels: The Amazing Spiderman 2 review