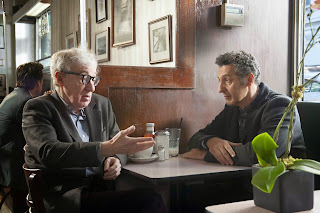 John Turturro is a prolific actor, writer and director who hasn't done a big screen role since Transformers: Dark of the Moon. His newest independent film which he wrote and directed was screened in the Special Presentation section of the 2013 Toronto International Film Festival. This year it was being presented at the USA Film Festival in Dallas.

Murray living with a woman of color and a handful of kids who call him Papa, has to take one of the children to the “lice lady” who lives in the Hasidic Jewish community of Williamsburg. Avigal (Vanessa Paradis) is a widow with 6 children of her own. Murray who could probably sell ice cream to Eskimos keeps returning to talk to Avigal sensing a frustrated woman. He suggests that she needs some “therapy”. Their meetings do not go un-noticed by Dovi (Liev Schreiber) who is a member of the neighborhood watch group. Dovi has had a secret attraction to the widow. He wonders why Avigal is suddenly leaving and coming home with a smile on her face after going to town to see the doctor. Although her massage sessions with Fioravante are chaste, they help Avigal overcome the deep sense of loneliness that she endures due to the constraints of her religious culture. Dovi follows her and investigates Murray to find out just exactly what is happening. He then grabs Murray off the street with his other patrol members to be put on a Jewish trial for leading one of their astray. Meanwhile Fioravante realizes that he may be falling in love with the lovely Avigal, just when Dr. Parker is finally ready for the threesome.

The comic moments of Stone and Vergara deserve a movie with just the two of them. The story of Avigal's self discovery is worth a movie on it's own too. The film plays back and forth with Woody Allen's one liners and probably improvised scenes. It's Turturro who seems more estranged from the film. He plays Fioravante as a quiet, contemplated man who seems to let things happen instead of being active. One has to believe that a middle aged guy like Turturro is a stud and that a successful woman is willing to pay for it. The movie takes off in tangents, then ends up going no where, but it was interesting while it was doing it.
(Review by reesa)