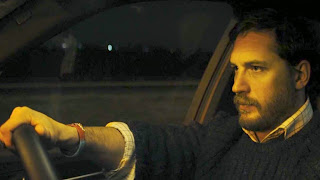 There have been a few films with the concept of one actor in a closed space battling whatever. The focus is on that one single character and how to keep the audience attention to care about his dilemma.
Like Sandra Bullock in Gravity talking to herself in space, Robert Redford in All is Lost forgetting how to talk at sea, and Ryan Reynolds in Buried, stuck in a coffin with only a cell phone, there is Thomas Hardy in his car for his 80 minutes while he drives from Birmingham to London. Hardy who can fill a screen as Bane in the Dark Knight Rises, a moonshiner in Lawless, a MMA fighter in Warrior is one actor who losses him self in each role. It takes an actor of such emotional depth to keep one riveted to the story.

As Ivan, Hardy plays a construction foreman who is in the middle of a huge building project, the biggest job of his life. But now he is rushing to the side of his needy girlfriend Bethan (voiced by Olivia Colman) who is going through labor anxiety during the birth of their child. He also has to call his wife (Ruth Wilson), mother of his two sons and inform her of his infidelity. On top of that he walked off the job on the eve of the largest concrete pour in Europe. His boss is on the phone, his wife, his co-worker who he left in charge of the project, his kids and mother of the new child coming into the world. When he's not talking to everyone trying to keep all the balls in the air, he carries on conversations with dead father while he works out his demons. Hardy's voice is gruff, his face and hands on the steering wheel are clenched and tense. He's really a decent guy. A hard working family man who is good and respected at his job. He made one mistake and that resulted in a pregnancy which Bethan wants to keep. Ivan doesn't want to be an absentee father like his and owns up to the responsibility. But the cost may be his job and his family.

Director/writer Steven Knight (screenwriter for Dirty Pretty Things and Eastern Promises) shot the movie with Hardy in car pulled on a trailer. The voices on the phone were sitting in a hotel room talking to him in that car while they drove on the highway with 3 cameras running. They shot the whole film at one time. Then they did it 15 more times to make the cuts in editing. Hardy had a cold at the time of the shoot so they incorporated his cold, coughs and nose blowing into the story.

Hopefully the Oscars will remember this performance at the end of the year, because Hardy hits this out of the park. He's mesmerizing as we watch him on this real time journey and deals via his GPS and phone dock with the various crisis that befall him. He tries to remain calm, reasonable, and maintains hope even when everything is crashing all around him. It also makes one not like phones. Ever.
(Review by reesa)