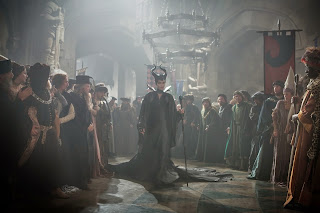 The new Disney feature is beautiful to look at thanks to the visual effects expertise of the debut director Robert Stromberg. The retelling of the evil villainess of Sleeping Beauty from a screenplay by Linda Woolverton is based on La Belle au bois dormant by Charles Perrault and Little Briar Rose by The Brothers Grimm. Spinning an alternate view from the perspective of Maleficent as the Broadway play did for the green skinned witch in Wicked. The message to children is that not everyone starts out bad. Sh*t happens and things get turned around, but redemption can also save the day. Blah, blah, blah.

In this world there are two kingdoms. One of humans with their greed and artifice. And the Moors, the land of magical creatures. Maleficent (Isobelle Molloy as a child, then Angelina Jolie) is a faerie. She looks like a normal young girl but with horns and huge bird wings. She seems to be the Alpha in her world so when a young human comes trespassing in their kingdom taking a stone from their waters, she confronts him to return the treasure. They develop a friendship over the years culminating in a kiss. However Stephan (Sharlto Copley) becomes an ambitious adult. The current King Henry (Kenneth Cranham) of the human kingdom wants the Moors, bringing his army he attacks. Under the leadership of Maleficent with her deadly wings, and the magical trees quickly defeat the king. King Henry dying from his injuries vows that whoever can defeat Maleficent will be made his successor.

Stephan ends up betraying Maleficent by cutting off her wings in order to become king. Both end up going a little nuts. Maleficent turns her magical rage into making the Moors a dark and forbidding forest. The king is filled with greed and guilt. When the Princess Aurora is born the pixie fairies (Leslie Manville, Imelda Staunton and Juno Temple) come to bestow the princess with gifts of beauty and kindness. But then Maleficent shows up to curse the child with the infamous pricking her finger on a spindle and sleeping until awakened by true love's kiss. It's a ode to the the early Disney movie with the costume and the evil speech. The king orders the pixies to hide her in the woods until the day after her 16th birthday, then proceeds to get increasingly paranoid.

The film is eye candy for viewers with the magical kingdom, the fanciful fairies, and Angelina's sharp cheekbones that is like the animated version. The viewer is invited to understand her anger over betrayal and detest the king whose madness makes him the villain. Elle Fanning as the teenage Aurora is full of beauty and light that melts the edge of Maleficent. The amusing banter between Maleficent and her shape shifting raven Diaval (Sam Riley) keeps the story from being too much of a downer. The retro plot of a woman scorned seems to be a little too obvious, and her response to curse a baby seems to be overkill. That's what fairy tales are all about. The funniest bits are the inept pixies in charge of taking care of Aurora. Would love to see a movie with just them.
(Review by reesa)