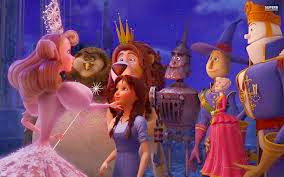 At first glance it would look like a straight to video family movie, but directors Will Finn and Dan St. Pierre have taken the novel by Roger S. Baum the great grandson of L. Frank Baum, author of The Wonderful World of Oz and created a worthy addition to the Oz universe. With a screen play by Adam Balsam and Randi Barnes the film brings Dorothy back just after the Kansas tornado and she awakens back home. Time is relative in the two verses. The 3D computer animated feature was produced using the Prana Animation Studios and Summertime Entertainment. What makes this film stand out is the musical numbers written by Bryan Adams, Tift Merritt, Jim Dooley, and Jim Vallance. They have a fresh feel to them and worthy of a OST listen.

Dorothy is voiced by Glee wonder Lea Michele who is vexed by a couple of con artists who condemn the farm after the tornado. Auntie Em (Tracey Adams) and Uncle Henry (Michael Krawic) tell her it's adult stuff and resign themselves into leaving the homestead. Frustrated and angry she runs off and gets sucked into a rainbow back to Oz where time has flown by. Her old friends the Scarecrow (Dan Aykroyd), the Lion (James Belushi) and the Tin Man (Kelsey Grammer) are in trouble as the scepter has been stolen by the Wicked Witch of the East's brother, the power hungry Jester (Martin Short). He turns all the important Oz people into marionettes including Glenda the Good Witch (Bernadette Peters). He has also kidnapped her friends. To save them Dorothy embarks on a journey where she meets new friends who join her mission. A marshmallow man named Marshal Mallow (Hugh Dancy), a large owl named Wiser (Oliver Platt), The small China Princess (Bonnie Wright) and Tugg the tree (Patrick Stewart) who volunteers to be their boat. The Jester stymies their rescue plan along the way with the help of the flying monkeys. After many hardships, Dorothy doesn't want to see anyone else get hurt and decides to confront the Jester on her own.

The music and story while engaging is held back by the not so pristine animation. Spoiled by Pixar and Disney features, the artwork from Prana Studios hearkens to more of a Saturday morning TV style and the 3D is rendered useless in the special effects. The facial expressions are kind of bland and robotic. The only character that comes to life is the Jester. It is mostly the voice actors that breathe life into the movie and this picture has tons of worthy talent. And of course the musical numbers which pop up to drive the story. There are many more novels from Roger Baum's Oz series that will probably be developed with the success of this film. It's a good one to keep on DVD and a nice one to take the little ones to the theater.
(Review by reesa)