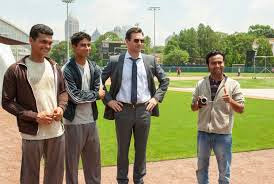 The real life JB Bernstein was amazed how accurate the new movie portrays the events, the good and the bad. Director Craig Gillespie (Lars and the Real Girl) with a screenplay by Tom McCarthy (Win Win) captured the feel good formula sports movie that has unique themes of culture shock, family, redemption and baseball. Disney scores a home run with a good family film in this time of superheroes and giant monsters.

Mad Men's Jon Hamm plays JB Bernstein, a once successful sports agent who is trying to do business on his own but is scoreless in the ninth. His business partner Aash (Aasif Mandvi) thinks that his new idea of combining a reality game show like Britain's Got Talent with a search for an athletic wonder in a country that only plays cricket is not the best idea. But the desperate JB manages to talk his investor Chang (Tzi Ma) into funding the project. Coming straight from Los Angeles, working in India is a rude awakening. With the help of baseball fanatic Amit (Pitobash) who asks to work with him without pay becomes his interpreter. They go from village to village testing out cricket bowlers but no one seems to be able to throw a ball faster than 55 mph. The ancient coach flown in on their small budget is Ray (Alan Arkin) who sleeps during most of the pitch contests. But he knows the sound of a fast pitch. They eventually find Rinku (Suraj Sharma – Life of Pi) and Madhur Mittal – Slumdog Millionaire) who win the reality show contest and the chance to go to America to train and try out for the major leagues.

The second act follows the young men as they try to adjust from living in a small village where TV, cellphones, and the Internet is not common. They end up staying at JB's house, which grates on the single playboy. His neighbor Brenda (Lake Bell) a med student takes the boys under her wing and manages to dispense some words of wisdom to the myopic JB who is too focused on business and not seeing his clients as people. The fish out of water concept has been done to death, but it's handled really well here due to the performances by Sharma, Mittal and the scene stealing Pitobash. The young men are taken to USC to train with Tom House (Bill Paxton) who advise JB that it is improbable to create major league class pitchers in nine months, especially when they have never seen a baseball before.

The final part of the movie has the young men trying out without success after JB puts on hype filled event. Of course JB must have an emotional and revelatory catharsis when he finally accepts the responsibility he took on when bringing the young men to the States. Thanks to Brenda who tells him that she likes the JB that shows a human side and not the one who only cares about business. This may be be a Jon Hamm movie, but his character takes too long to see the light. The ending is the feel good moment that was promised and the ending credits show the real life young men with a mention of what they are doing today.
(Review by reesa)