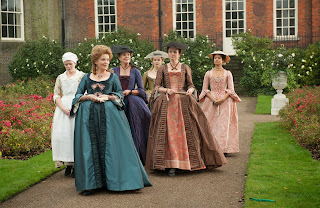 For fans of historical costume dramas this one is filled with lush eye candy that will satisfy any fans of the Downton Abbey genre. The film was inspired by a 1779 painting of Dido Elizabeth Belle and her cousin Lady Elizabeth Murray. Little is known of the actual life of Dido Belle and the story by Misan Sagay and directed by Amma Asante fill the void with timely themes on slavery and racism and a touching love story. The new “it” girl Gugu Mbatha-Raw who Doctor Who fans know as Tish Jones from the 2007 season. The international flavor of the Ghanaian filmmaker, Nigerian writer and South African actress gives a different sensibility to the production. Everyone understands the position of being a woman of color in a white world.

Dido was born to a former slave and a British captain. When the mother dies, her father Captain Sir John Lindsay (Matthew Goode) takes the child to his uncle the 1rst Earl of Mansfield William Murray (Tom Wilkinson) and his wife Lady Mansfield (Emily Watson). He charges them to bring her up as an aristocrat as that would expected for his child. Lady Mary Murray (Penelope Wilton) who is the same age as the young girl is also a ward of the Earl as her own father and heir of the estate had remarried and she is basically penniless as the new wife takes precedence. As children the girls grown close like sisters. The adults are the ones who are vexed by the inclusion of mulatto in their household. They educate her, dress her as due her station, but when company comes over she is not allowed to dine with guests. As much as they come to love and respect their bright and beautiful niece, they are like everyone else of that time uncomfortable with having a person of color in the family. They worry about her finding a husband.

Lady Ashford (Miranda Richardson) and her sons Oliver (James Norton) and James (Tom Felton) are the extreme of the attitudes that befall Dido and her cousin. Their machinations to court the young women for all the wrong reasons makes her eventual attraction the vicar's son, the lawyer John Davinier (Sam Reid) more corset busting. The idealistic lawyer is focused on a lawsuit that if defeated will lead the way to outlawing the slavery in England. The two have an intellectual attraction and it helps they are both a very nice looking couple. The Earl who is also the Lord Chief Justice of Britain on the case must come to terms that his niece may influence his decision.

This movie works because of the appealing and engaging performance by Mbatha-Raw who is destined to be the new shiny thing. The themes touch on some timely issues that are relevant today by the recent news of racism that still stubbornly persists. Although we have come a long way from Dido's world it doesn't really feel that we have come far enough. This movie will hopefully open the conversation while at the same time entertain you and look pretty while doing it.
(Review by reesa)