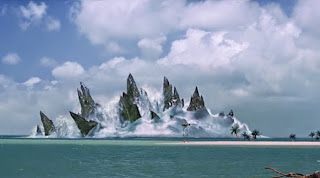 Everyone's favorite monster is back. Godzilla is so embedded in worldwide pop culture since the 1954 Japanese film by Toho Co., Ltd and the 28 other Godzilla films they produced. Gojira, a combination of two Japanese words: gorira, meaning gorilla, and kujira, meaning whale which somehow equals Godzilla. His appearance resembles a Tyrannosaurus rex, with the long arms of an Iguanodon, and the dorsal plates of a Stegosaurus. It's size varies from film to film but in this newest adventure. It's more like a small island that for once does not destroy New York, but levels Maui and San Francisco. Directed by Gareth Edwards (who did the amazing Monsters in 2010)with a screenplay by Max Borenstein, the film lives up to his King of the Monsters status.

The classic premise is that Godzilla was caused by the nuclear bomb testing in the Pacific, but it turns out that may not be the case. The government has been keeping it a secret until they find a collapse cavern with some humongous bones and tracks of something huge breaking out on the other side of the mountain down into the ocean. Bryan Cranston plays Joe Brody, a nuclear engineer working at a Japanese power plant that suddenly is besieged by earthquakes and something is draining the power from the plant. The accident kills his wife (Juliette Binoche) and he becomes obsessed with finding out why. Fifteen years later his son Ford (Aaron Taylor-Johnson), now a Navy Lieutenant and an explosive ordnance disposal technician, has to fly to Japan to bail out his dad who was caught trespassing at the plant that has been declared a radioactive zone. He ends up going back to the plant and they find themselves caught into something they were not expecting. Dr. Ishiro Serizawa (Ken Watanabe) and Dr. Vivienne Graham (Sally Hawkins) are part of the government team investigating the radioactive creatures they are sourcing for power when suddenly it goes live.

The new creature is called M.U.T.O – Mutant Unknown Terrestrial Organism. It needs to absorb radiation and drain the power of everything around them, basically causing EMPs (electromagnetic pulse). The creature looks like a big spider/cockroach that flies. Brody was investigating some audio that the creature may be talking to something out there, which of course is in some secret lab in the States. MUTO is on the move and it hits Hawaii before heading to San Francisco, eating power plants along the way. Ford who was with his dad, is now returning to his doctor wife Elle (Elizabeth Olsen) who in typical wife waiting for husband is in the path of the monsters. Ford is supposed to change planes in Hawaii, but he ends up in the thick of things He gets a ride with the military who are gearing up for the attack in California. Not only are the two MUTO's converging, but something older and bigger is heading their way too. The military powers that be, Admiral William Stenz (David Strahairn) has this plan to tempt the radioactive hungry creatures to a spot and blast them to kingdom come. Dr. Serizawa thinks it's a bad plan because they feed on radiation. No one listens to him, because what does he know, he's Japanese and has only studied Godzilla for years.

Besides the CGI mayhem that you would expect from this massive production, the movie manages to maintain a sense of urgency and excitement. People are not running around doing bone head things. You get the scope of how big Godzilla is from the way his back plates are exposed when he's swimming in the ocean causing destroyers to rise on huge waves that create a tsunami drowning parts of Hawaii. At least Godzilla is not a guy in a zip up suit knocking down cardboard miniature cities. There's some nods to Alien and Aliens in this, Transformers, Pacific Rim and of course the original Godzilla movie. The battles are to be expected mostly shot in haze and falling debris. The clouds of smoke and fog help keep the suspense in the scenes, especially on the train bridge. The best scene is during the Halo insertion when Ford is falling by parachute in the middle of Godzilla battling a MOTO. Very cool. At least this is not the 1998 Godzilla version which was plain annoying. This will hopefully reboot the franchise. It's worth seeing again.
(Review by reesa)