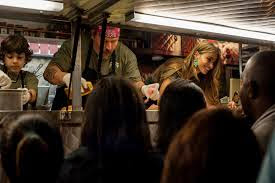 Damn you Jon Favreau for making me so hungry while watching this. I will say off the bat this is my favorite Jon Favreau directed film. Let's break this down. The film is directed and written by Favreau and he also directed Iron Man. Well this is a big departure but it works. Favreau writes this simple, yet very touching and inspiring, story about father and son bonding, doing what you love and cooking good looking food. I am a filmmaker but after watching this I was inspired to have my own food truck. Overall the directing from Favreau felt fresh and original and that's the best compliment you can give a film. The acting is very good and Favreau gives a good performance but I actually liked all of the supporting cast more. John Leguizamo, Bobby Cannavale, Scarlett Johannson, Sofia Vergara, Oliver Platt and, Iron Man himself, Robert Downey Jr. Everyone brings humor and heart to each of their characters and that also credits Favreau for a good script. The cinematography is good but it is great when they show close-ups of all the food they make and prepare. It makes the food look delicious and, quite frankly, those shots are sexy as it is like food porn. The change of scenery going from locations like Texas, Louisiana and California is nice and just adds another great layer to this film. The pace is good, however, people may get tired of it towards the end because it is two hours long but that didn't bother me. I was having a good time with it to where the length didn't bother me. This is a fretting, original film that is great to see in the midst of the blockbusters. If you like the cast, Jon Favreau or food, I think you will enjoy this nice little gem. 8.5/10
(Review by Chase Lee)