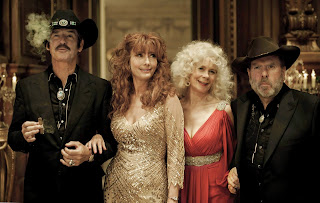 One would think that the combination of Pierce Brosnan and Emma Thompson in a “wacky” comedy would endear and delight and you couldn't be too off the mark. Their expected star power manages to overlook the poor script and direction by Joel Hopkins (Last Chance Harvey). It's the kind of movie that will make you smile then quickly forget about as soon as you leave the theater.

Emma plays Kate Jones who has been divorced from Richard Jones for a number of years. When they see each other at a wedding, they speak to each other in those short clipped snide comments from knowing someone for too long and know where all the bodies are buried. Their best friends Jerry (Timothy Spall) and Penelope (Celia Imrie) assume hopefully they are getting back together. And despite their denial, there's still a brief spark of chemistry between them. (or maybe because the script is so transparent you know that's exactly whats going to happen). Richard discovers that the new owners of his company have filed for bankruptcy and everyone’s pensions are gone. Kate goes with him to Paris to see the CEO of the takeover company by helping him sneak into his office before the smarmy young executive (Laurent Lafitte) has them thrown out. They discover that he had gifted his fiancee (Louise Bourgoin) with a huge diamond called the “Eye of the Rainbow” which is worth 10 million dollars. Kate suggests that they steal it at the rich couples' wedding in the south of France. Yeah, ok.

Using their college son's hacking skills they research information on the CEO about the wedding. They do their own recon with Kate pretending to be relative of the husband to be to get close to bride. She is having doubts regarding the wedding and bonds with Kate's honesty about marriage. With the help of Jerry and Penelope they fabricate a fake diamond, snorkel in scuba suits, rock climb up the cliff and pose as Texans that were invited to the wedding. This is after they knocked out the real Texans in their hotel room.

There are several running gags through out the movie like Kate and Richard Skype'ing visuals of their son's roommate doing odd things, Jerry's revelations about his colorful background that were completely unknown to his wife of 35 years, and Kate and Richard's allergies to flowers and cats. The movie starts like a decent British comedy of mature adults and quickly falls into slapstick which escalates into outrageous farce. The film is saved by the charming foursome that keeps the film romantic. It would make a good DVD rental.
(Review by reesa)

Posted by Dallas Movie Screenings at 10:00 AM

Email ThisBlogThis!Share to TwitterShare to FacebookShare to Pinterest
Labels: The Love Punch review