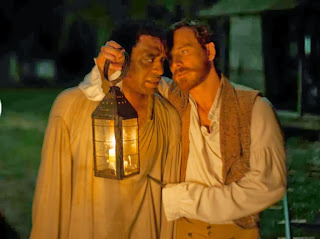 Movies about the atrocities that humans inflict upon each other seems to be a popular and well used vehicles for drama. The 1853 autobiography by Solomon Northrup about his experience of being a free black man living in New York and was kidnapped then sold into slavery in Louisiana was considered a best seller when it was published. It stirred the public debate over slavery leading up to the civil war. Directed by Steve McQueen (Shame) and written by John Ridley (Red Tails) the journey is brutally detailed and emotionally draining.

Chiwetel Ejiofor will probably be on the shortlist for Oscars this year for his portrayal of Solomon Northrup. Solomon was a free black man living in Saratoga, NY with his wife and two young children. He made a living playing is violin. He is offered a job in Washington DC playing for a circus. But instead the men drug him and sell him off to slave traders. His will to maintain his true identity is beat out of him and he finds the best way to survive is to keep low and not let people know that he is educated. He's shipped further south and sold off to William Ford (Benedict Cumberbatch) who somewhat appreciates his intelligence. But the sadistic overseer John Tibeats (Paul Dana) doesn't like the uppity N-word. Trouble ensues and Platt, his new slave name, is sold to Edwin Epps (Michael Fassbender) who is known as a N-breaker. Epps uses Bible passages to turn into justification for beating disobedience from his slaves. He's like the stereo typical southern slave owner that's ever been created. Drunk, capricious, mean, and depraved. His wife Mary (Sarah Paulson) is equally as cruel, especially towards Patsey (Lupita Nyong'o in an award worthy first performance) who is favored by her husband.

It's through Solomon's eyes that we bear witness to the dehumanized treatment and extreme violence that was fostered upon a group of people. Ejiofor soulful eyes reflect the horror, agony, fear, cunning and fierce will to retain his human dignity. The film does not flinch in it's depiction of the human subjugation that is demeaning and soul sucking, creating zombies who flinch at just a look or sound. Yes, despite the sweat, and harshness of working the fields of cotton and sugar cane, the workers used their music to soothe and unite each other in their collective sorrow.

It's apropos that the current issue of human trafficking and slavery is at the forefront of today's news as well as the current racist undercurrents of political arena. This film will certainly open up the dialogue that needs to be addressed. As a movie, this is extremely well done and will move one to tears. However this is not for the faint of heart as the violence is graphic and disturbing. But those that are willing to endure it will fill your heart and consciousness.
(Review by reesa)

Email ThisBlogThis!Share to TwitterShare to FacebookShare to Pinterest
Labels: 12 Years a Slave review