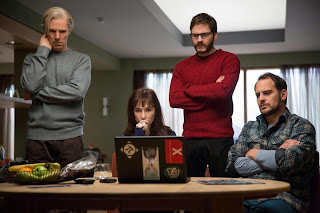 THE FIFTH ESTATE is one of those movies that most of the audience assumes that they know what they are going to see because of what they have heard or read about Julian Assange founder of WikiLeaks which is partially true.  Julian Assange is brilliantly played by Benedict Cumberbatch.  He is known for his amazing work as Sherlock Holmes in SHERLOCK (TV Series) 2010-2014.   Daniel Domscheit-Berg is Julian Assange colleague played by Daniel Bruhl.  Daniel Bruhl was one of the fabulous actors in RUSH.  He played Niki Lauda a very famous car racer in the 1970s.  All the performances in The Fifth Estate were betrayed magnificently.

The movie was 128 minutes long.  It was a long movie but I am not sure it could have been made shorter. It had so much to cover, it takes place in almost every prestigious city or country around the world.  Julian Assange and Daniel Demscheit-Berg traveled all over the world discovered links that most of the time destroys corporations and/or families lives.  It covers most of the links discovered by Julian Assange using the website he created called WikiLeaks. From the very beginning you feel that you were watching history being replayed.  Julian Assange and Daniel Domscheit-Berg with an army volunteers create a platform that allows whistle-blowers to anonymously leak covert data, shining a light on the dark recesses of government secrets and corporate crimes.  Watching The Fifth Estate is edge of your seat shocking, wanting to see what was going to happen next.  It kept my attention from the very beginning to the end.  It is not for everyone, I therefore recommend you see THE FIFTH ESTATE and judge for yourself.
(Review by Lila Katz)

Posted by Dallas Movie Screenings at 8:59 AM