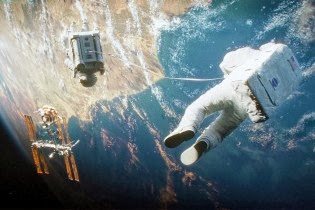 This is breathtaking. This is the most visually stunning movie I have experienced this year. There hasn't been any movie depicted in space as well done as this one. Alfonso Cuaron is one of my favorite directors. This guy knows how to work a camera. Gravity opens up with a 17 minute one take shot and it is impressive. He has directed Children of Men and it also had similar camera work. Cuaron is a master at what he does and this is no exception. The acting from George Clooney and Sandra Bullock is very good and they both gave very good performances. The dialogue was a little silly but I got passed that. The cinematography was fantastic to say the least and beautiful at some times throughout especially with the impressive visual effects. This are the best visual effects I have seen in a movie period. I felt like I was in space. This is one of the most impressive movies I have seen this year and I am pretty sure it will be nominated for an Oscar especially for Visual Effects. The score was also great as it added great tension to this white knuckle thriller. This is one of the best movies of the year and I highly recommend that you see it in 3D IMAX. The dialogue was a little silly but that's the only complaint. 9.5/10
(Review by Chase Lee)