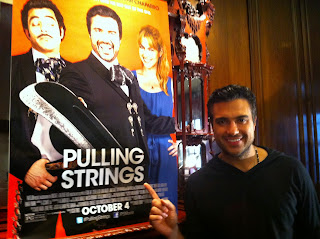 Pulling Strings, a bilingual comedy which takes place in Mexico City, is pure fluff. Some films can survive a clichéd script because of the actors/talent on board. This one had my jaded eyes rolling several times; but why knock a harmless romantic comedy when its heart is in the right place?

Our romantic leads first meet at an USA immigration office in Mexico City when the heroine denies our hero a visa for his daughter. But the real “meet cute” moment happens later when she’s passed out on a city bus stop bench and the hero “rescues” her. The scene reminded me of the 1953 classic Roman Holiday and the similarity stuck. An adventure through the streets of a magnificent city follows with the usual secrets and discovery of love. Well photographed, Mexico City can be as mysterious and enchanting as Rome. The filmmakers succeed in presenting Mexico City not as the latest headlines suggest, but as a place where beauty abounds and dreams are possible.

Music is all important in all romantic films and Pulling Strings doesn’t falter. Jaime Camil’s singing is spotlighted throughout. Playing a visa-seeking mariachi, Camil’s got looks and charm; it’s no wonder he’s a star south of the border. Omar Chaparro, another Mexican star, does well as the side-kick who’s onboard for comic relief.

The American heroine, nicely played by Laura Ramsey, gives off the right vibes but also the wrong ones as dictated by the poor script. I had real issues with her character: she’s been working in a US government office in Mexico for two years, and doesn’t speak Spanish? And she’s never explored the City? The cliché of the ugly American, a blonde one at that, is too glaring and indicates the filmmakers doesn’t trust the audience, or is just playing to the lowest common denominator.

Tom Arnold and Stockard Channing are featured in supporting roles to perhaps satisfy an American audience. Ms. Channing does no wrong – but the mother/daughter side show could easily have been left on the cutting floor. The film is a good 30 minutes too long. One feels that the filmmakers wanted to cover too many bases. They should have just focused on the charms of Jaime Camil and Mexico City.
(Review by David Bacon)