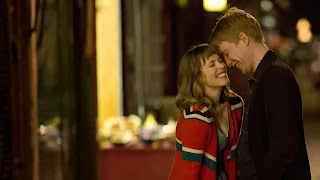 Director/writer Richard Curtis who brought the world magic with Notting Hill and Love Actually (the best Christmas movie EVER) is back with another sweet love story. Most of his movies are populated with familiar characters. They are like everyday people with hopes, dreams, and just about like everyone you know in real life. They are funny, quirky and endearing. And while this film is not quite as memorable as those mentioned, it stands on his own as not just being a chick flick. The story of the father and son is one that men will hopefully find life affirming.

When he turns 21, Tim (Domhnall Gleeson who played Bill Weasley in Harry Potter) is corralled by his father (Bill Nighy) who shares with him a family secret. The men in their family have the ability to travel through time. They can go backwards but they can't go forwards. The rule is that you really can't change major events in the past because it will have a butterfly effect. All one needs to do is find a closet and make your hands into fists and think of where you want to go. As expected, being a young man, Tim uses his new powers to make a better impression on his sister's friend who is spending the summer with them. Unfortunately no amount of fine tuning with change the outcome of her affection. Later me moves to London to pursue is law career. He stays with a friend of his father, sour puss attitude playwright Harry (Tom Hollander). He meets Mary (Rachel McAdams) at a restaurant concept where you dine in the dark. They have instant chemistry, and through a series of time adjustments, Tim manages to acheive a successful relationship.

The love story with Mary is everything that is expected from a Richard Curtis film. Being romantic, touching and what women hope for in their own lives. The charm of this film is Tim and the poignant relationship with is father. Domhnall Gleeson is the new sex symbol. He's a normal looking guy whose sincerity and charisma trumps the he man image of the big screen heroes. Bill Nighy, a regular cast member of Curtis films, is funny and self effacing as the dad who wants to show his true affections for his only son. There are also some great characters like Tim;s free spirited sister Kit Kat (Lydia Wilson), Linsday Duncan as Tim's mom, the doddering uncle Desmond (Richard Cordery) and the beautiful sea side family home.

The ultimate message of the movie is that even though we don't have the powers to change our history, we should instead take our time to stop and appreciate the events around us, no matter how small and trivial. There's one scene where Tim, harried and short tempered, rushes through his day, being curt with the coffee girl, annoyed by the music bleeding from someone's headphones, and going into a panic during a trial. As he goes back to relive those moments, he takes a different track and instead savours those small things and not let them torment him. Because as he finds, one really only gets one chance to live this life. Live it fully while you can.
(Review by reesa)

Email ThisBlogThis!Share to TwitterShare to FacebookShare to Pinterest
Labels: About Time review