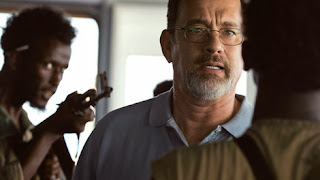 In April 2009 Richard Phillips was taken hostage by Somali pirates when he was captain of the MB Maersk Alabama. Phillips with Stephan Talty wrote a book of the adventures in A Captain's Duty: Somali Pirates, Navy SEALs, and Dangerous Days at Sea which was adapted by Billy Ray (The Hunger Games, State of Play, Breach) and brought to the screen by director Paul Greengrass (Bourne Supremacy, Bourne Ultimatum, United 93). Greengrass approached the movie like a documentary, giving it a straight play by play account of the events as they happened letting the actors create the scenes from beginning to end without interruption. The locations were shot in open seas using real SEALS and the Navy let the production have free access to a couple of ships that were used in the rescue.

Phillips (Tom Hanks) had been a mariner for 30 years. Leaving his Vermont home he boards his ship in the Middle East. The large freight ship full of containers must navigate through Somali seas which is known for it's pirates who make their living from attacking ships for their cargo. The chances of being attack is a real threat and the Captain is diligent in preparing the crew of 20 for it's possibility by running drills and reinforcing the pirate gates. The pirates played by Somali-Americans Faysal Ahmed, Barkhad Abdi, Barkhad Abdirahman and Mahat M were selected from 800 hopefuls in Minneapolis, the largest Somali community in the US. Greengrass kept the young men away from the rest of the cast so their first meeting with Hanks is the scene where they burst into the control room. The tension and chaos of the moment is evident in their faces.

Phillips is later taken by the pirates as they try to get away on a life boat which they hopefully will exchange him for ransom. As in all movies where you pretty much know the ending with the Navy coming to the rescue, it's nice to note that the personnel on the ships and the SEAL teams were authentic. Even the medic that examines Phillips after the rescue ran through the actual emergency medial protocol while calming the dazed and stunned captain. Her reassurance that he's OK calms the audience at the same time after we've been sitting at the edges of the seats for most of the movie. Tom Hanks gives an Oscar level performance as Captain Phillips. Quite possibly the best thing he's ever done.

On an interesting note, the real life crew of the Alabama are currently suing the shipping company charging that Maersk and by rights Captain Phillips knew about the dangers of those waters. That Captain Phillips was sailing too close to the coast putting them at risk. The fact the Phillips kept the crew safe (by hiding from the pirates) and used himself as the hostage to get the pirates off the ship is what was more important to the captain.
(Review by reesa)