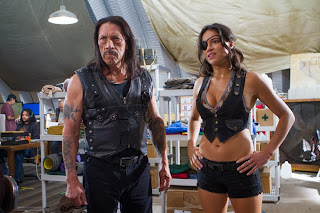 Born from a trailer that played between the Grindhouse movies, director Robert Rodriquez expanded the tale of Machete Cortez an ex-Federate with deadly skills and a badass attitude. This time it's written by Kyle Ward which takes the character into more over the top over kill that will either annoy you or make you laugh out loud. As usual they have some big name actors showing up including Charlie Sheen who is billed under his real name of Carlos Estévez. The whole movie is filled with dismemberment and other gruesome demises under Machete signature moves. As one friend remarked...”it actually had a story”.

Machete (Danny Trejo, whose vertically challenged height is played for laughs at times in this movie) is working with girlfriend Santana trying to stop an illegal shipment between the Mexican army and the cartels. Just when it looks like they are done for, another group of masked men drop from the sky and shoots everyone. Unfortunately, Jessica Alba as Santana has a very brief role in this sequel. Machete manages to escape, but lands in the hands of a local American sheriff (William Sadler) who tries to deliver some southern justice to the “taco” but is interrupted by a call from President Rathcock (Carlos Estévez) who wants Machete to go back to Mexico and find Mendez a freedom fighter turned terrorist. He's got a weapon that will destroy Washington. Miss San Antonio (Amber Heard) had been assigned as his handler who is able to run her intelligence operations through the access afforded her by the beauty pageant circuit. Demián Bichir is extremely funny as the personality shifting Mendez, who is either stone cold crazy or sane and patriotic. The crazy Mendez attached the timer of the bomb to his heart. If he's killed the bomb will explode. Machete must track down the only other person that knows how to disarm the device while a bounty is put on the death of Mendez and everyone wants to collect.

Some recognizable faces show up as bounty killer El Cameleón such as Walton Goggins, Cuba Gooding Jr., Lady Gaga and Antonio Banderas. Sofia Vergara is wild and crazy as the brothel madame with a machine gun bra and a strap on pistol as Madame Dedemona with a virginal daughter Cereza (Vanessa Hudgens). On top of all this is Mel Gibson as the weapons manufacturer Luther Voz who has a plan that will be featured in the next episode of Machete in Space. This is not a movie for everyone, but it's great campy fun. The mood is also set nicely by the Alama Drafthouse with their preshow features on machete clips from really horrible movies. As Machete says...”Machete happens”.
(Review by reesa)