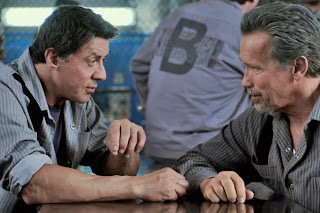 There has to be some point where old action stars ease into more varied character roles that are suitable for their ages in a dignified graceful fashion. The bigger than life persona of Sly Stallone and Arnold Schwarzenegger offers a certain amount of audience anticipation. But now it's more like a a curiosity to see how these men who are in their mid 60's can endure the physical abuse and the stunts for this type of movie. Both still look good, although they move a bit more slowly than before. Sly still talks like he has marbles in his mouth, and his hands look like sausages. Arnold fares better looking tanned and well cared like a successful businessman or a used car salesman.

Sly plays a security expert Breslin who has been breaking out of prisons for the past 7 years. He used to be a prosecutor, but changed his career due to some tragedy in his life. He fakes his way into the prisons, then breaks out revealing to the wardens after the fact of the various weaknesses in their systems. He accepts a job offer by a CIA agent who want him to test a private prison that was based on the definitive book that he wrote on prison security. Although his team Hush (50 Cent) and Abigail (Amy Ryan) see red flags and advise not to take the job, his business partner Lester (Vincent D'Onofrio) thinks the 5 million dollar fee is more encouraging.

Breslin is given the name of Portos and a fake background as a bomber. The plans go awry when his tracking chip is removed and they drug him on the way to the prison. The new prison is set up like glass boxes, 4 to a level, with no windows. The prison guards all wear masks and they brutally beat the inmates. Breslin's confidence falters when he discovers that his exit code do not work on Warden Hobbs (Jim Caviezel), a soft spoken, impeccably dressed sadist. His major henchman (Vinnie Jones) is particularly cruel. The only one with a conscious may be the doctor (Sam Neill). Breslin/Portos makes “friends” with Rottmayer (Arnold) who helps him with the escape plan. Hobbs is trying to get information about the location of Mannheim whose importance is a big foggy, but apparently important having to do with banks and money to be made.

Director Mikael Håfström (The Rite, 1408) paces the adventure with the usual standards for it's action formula. The screenplay by Miles Chapman and Jason Keller makes it easy and expected. The good guys get the crap beat out of them, the bad guys get their comeuppances. It pretty simple, totally unbelievable and more fun than it's got a right to be. If you can understand Sly configuring a mathematical equation and believe this character is capable of such, then your a half way there into your movie ticket investment.
(Review by reesa)

Email ThisBlogThis!Share to TwitterShare to FacebookShare to Pinterest
Labels: The Escape Plan review