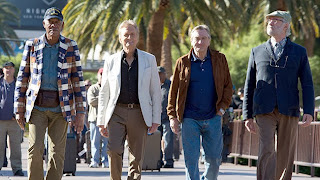 It didn't take long for Hollyweird to take the Hangover formula with a geriatric cast. Fortunately the leading men happen to be some of the most able, talented and award winning group of actors who unbelievably never shared the screen before this venture. Director of the National Treasure films, Jon Turteltaub and writer Dan Fogelman who did Tangled, Bolt and Fred Claus didn't dumb down the characters as much, nor make them too old and crotchety. It revitalizes the image and careers of the former action stars into the mature roles that show they can still get it up.

The four friends have been together since childhood in their Brooklyn neighborhood. Although they live in different parts of the country, they still maintain that tight bond between them. The news that Billy (Michael Douglas) the long time bachelor of the group is getting married to a woman 30 years younger than himself, inspires the friends to have a party in Las Vegas for him. Sam (Kevin Kline) who lives in a retirement community in Florida with his wife and widowed Archie (Morgan Freeman) who lives in New Jersey with son while he's recuperating from a heart attack have to talk their 4th partner in crime Paddy (Robert De Niro) who has had a falling out with Billy. Paddy is still upset with his best friend for not attending the funeral of his beloved wife. Now Paddy stays home in Brooklyn still mourning. They others basically have to trick him in to going and he's ready to head back when he realizes the party if is Billy.

The bickering continues as it does with old friends until they meet lounge singer Diana (Mary Steenburgen) a former attorney who decided to give up law and live her dream. They are all pretty much smitten with her. Especially Billy and Paddy. They both have long seated issues over Paddy's wife. Meanwhile Archie is hiding out from his son's overbearing surveillance. He had climbed out the window to go on this trip. Sam gets a note from his wife saying “what happens in Vegas, stays in Vegas” with a condom. All four actors are a delight to watch. Billy is the slick and a well to do Hollywood mover and shaker. Paddy is the Archie Bunker type, Sam is more urbane with with a smirk, and Archie is part goofy and wise. Diana gives them all a chance to put on the charm and flirt.

The sitcom type of humor prevails in this, with running jokes about Common (50 Cents), Sam's free pass for sex, Archie's win at the blackjack table that enables the guys to throw a party to end all parties, and eventual reconciliation of two best friends. There's even a bikini party thrown in there for obvious humor points. While you can see the set ups a mile away, you can't but help laugh out loud at some of the scenes. Thanks to the excellent performances and comfortable chemistry of De Niro, Douglas, Freeman and Kline. It begs for sequel.
(Review by reesa)