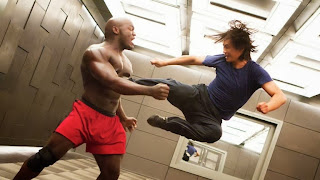 So what is it with entertainers becoming first-time film directors with martial-arts vanity projects? Last year saw RZA’s The Man With the Iron Fists, and now in theaters we have Keanu Reeves’ Man of Tai Chi. But whereas RZA’s effort was a loving tribute to old Shaw Brothers films that incorporated the structure of those films, Reeves’ movie is a disjointed compendium of fight sequences.

Basically the film is an effort to demonstrate the martial-arts skills of relative newcomer Tiger Hu Chen, who did stunt work for the last couple of Matrix films. He plays a talented but headstrong tai chi student who ignores his master’s advice to meditate and learn to control his chi and instead gets caught up in a series of illegal club fights staged by Reeves in order to raise money to save the temple from developers. This in turn serves as a plot justification for showing Chen competing with opponents employing a broad range of martial-arts styles: taekwando, mixed martial arts, Indonesian silat and a variety of Chinese styles. (Although what’s noticeably lacking is much tai chi, which isn’t really surprising, considering that it’s primarily a defensive technique.)

The fights, although well-staged (Reeves may be largely bereft of style as a director, but somebody had the good sense to hire Yuen Woo-ping to do the fight sequences), are so brief – several are strung together in a couple of montages – that they have little dramatic effect, and those that are given greater development, like the one that looks like a Vegas stage show complete with strobe lights, are just bizarre. The action switches back and forth between the Beijing area and Hong Kong, but even before the ineffective establishing shots (Can you immediately recognize the Beijing skyline? Neither can I.) are dropped, I found myself listening to determine whether the actors were speaking Cantonese or Mandarin or which side the steering wheels were on in order to figure out where the hell they were. And there’s this angle to the film that Reeves is turning the corruption of Chen into a made-for-pay-per-view spectacular by somehow surreptitiously recording his every move (in high-def, no less) that makes a lot of it seem like an “Up Close and Personal” segment from the Hell Olympics.

But the film’s biggest problem is probably the presence of Reeves himself as an actor. He tries to play his utterly reprehensible villain over-the-top, but over-the-top for an actor as laid-back as Reeves is merely breaking the surface for other performers. At one point he emits what I imagine was supposed to be a primal scream, but whatever it was, I’m guessing the response that it was intended to elicit wasn’t laughter. And although Reeves has pretty good martial-arts chops for an American without a lifetime of training, he’s still nowhere near Chen’s skill level, so when it comes time for the climactic battle, the slow-mo, wire gags and changes in film speed that weren’t employed for the film’s first 80 minutes are laid on thickly to cover up his lack of talent. And what should be the movie’s best fight sequence is its worst. And that’s not the way something as derivative as Man of Tai Chi should work.
(Review by Scott Bowles)