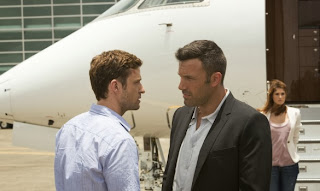 Slick and dangerous. That's the image portrayed by the movie posters for Brad Fuman's new movie Runner, Runner. It's about online gambling which apparently a big business raking in millions of dollars everyday. The Lincoln Lawyer director creates this fast paced template from a script by Ocean's Eleven writers Brian Koppelman and David Levien. One would expect some witty banter and layered plots, red herrings, and maybe some character development. It's a big shiny package with Styrofoam peanuts.

Justin Timberlake plays Richie Furst, a Princeton students working on his masters in Finance. Because he doesn't come from a wealthy family...his father is a down and out gambler, he's managed to support himself by being an “affiliate” for the online gambling websites. He gets the young rich students and some teachers to subscribe to certain websites to play for money. It's not technically illegal, but he's basically pimping for these gambling sites. After the dean threatens his scholarship, Richie decides to take his whole savings and play to earn the rest of his tuition. He loses, but his computer geek friends discover there was something fishy in the game. Richie decides to confront the owner of the website that is located in Costa Rica. Ivan Block (Ben Affleck) is the corrupt owner of the website. Seemingly impressed by Richie's chutzpah to confront him on being cheated, he offers him a job. He takes him under his wing promising him a chance to make millions. Richie brings his friends from Princeton to join him in his new marketing position. For what seems to be a smart person with a talent for numbers, is too stupid to see beyond the smoke and mirrors.

FBI Agent Shavers (Anthony Mackie) tries to blackmail Richie into working for him to bring Block down. Although he's still loyal to Block, it starts to ravel at the seams when Block sends him on questionable jobs that test his morals. Block is a charming big brother to Richie, telling him he sees his younger self in Richie's ambitions and abilities. Then he's feeding chickens to alligators. The red warning light should have been flashing for Richie. Even his friends start to get nervous. Gemma Arterton is the only there to provide eye candy as Rebecca, Block's one time girlfriend and business partner. Is she working Richie for Ivan or working with Richie. That's about the biggest question this puts forth.

It's interesting to note that Timberlake's new album is dropping at the same time this film opens in theaters. Nice marketing plan. Timberlake is a better actor than singer right now. Hopefully he'll get better roles in this worthy of Red Box rental.
(Review by reesa)