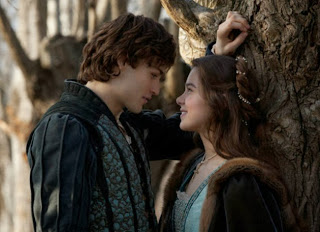 In 1996 a movie was made of Romeo and Juliet staring Leonardo DiCapiro as Romeo & Claire Danes as Juliet. Seventeen years later we have another Romeo and Juliet film updated in 2013.  Romeo is played by Douglas Booth and Juliet is played by Hailee Steinfeld, friar Laurence played by Paul Giamatti and Prince Escalus played by Stellan Skarsgard who all did their characters proud.  To be really honest with you I can’t remember the 1996 version of Romeo & Juliet.  I am quite sure that it was delivered in grand form to the movie world.  I happen to love William Shakespeare in any form as a play, musical or in a movie theater.  Seeing Romeo & Juliet 2013 movie was absolutely marvelous.  The performances by the actors were exceptional, the costumes worn by the actors were elegant, scenery was so picturesque.  They say if you have seen one Romeo & Juliet performance you seen them all.  In my opinion that is not true in the case. Julian Fellowes (Downton  Abbey) and director Carlo Carlei (The Flight of the Innocent) did a masterful job of bring this epic and searing tale of tragic love story directing the actors in make the most of a classic Shakespeare play into a 21st century style.

From the very beginning of the movie you were anticipating on what was going to happen with each scene.  Romeo & Juliet meet for the very first time at a costume ball given by Juliet parents to introduce a new prospective groom for Juliet.  When their eyes meet it was so romantic but in a very innocent way. Yes it was love at first glance of course.  That is the way I felt through the whole movie. Each moment carried the characters from one important scene to another.  Yes there was fighting, even killing between two rival families which were Romeo’s family members and Juliet’s family members.  They had been feuding for a very long time then when Romeo meet Juliet the fighting became more violent.

Friar Laurence played by Paul Giamatti was amazing in his role.  It put a new twist on how Romeo and Juliet came to the bitter end of their undying love for each other.

Posted by Dallas Movie Screenings at 8:41 AM