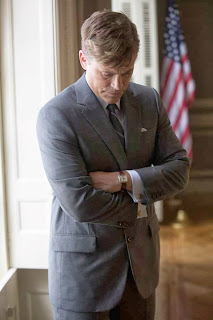 This is a well done TV movie. This movie focuses on Lee Harvey Oswald and the years before the assassination and I really appreciate that. The directing was solid and feel of this movie felt big budget but independent at the same time. if that makes any sense? The best way to put it is. It felt like television but on a larger scale than normal television. The acting was fantastic as I could tell each actor really got into their characters. Rob Lowe kills it (No Pun Intended) as JFK. It looked like he committed a lot of time to prepare for this role. But he was not the standout. Will Rothhaar as Lee Harvey Oswald was amazing in role as he completely embodied the character and showed us the humanistic side and got below the surface of the evil that we perceive. Ginnifer Goodwin and Michelle Trachtenberg did great as Mrs. Kennedy and Mrs. Oswald. The cinematography was great and the costumes and props made an authentic feel and they set the time period in the sixties pretty accurately. The movie is edited perfectly as I loved the way it was paced and I actually wanted more. This overall was a great TV movie and I really enjoyed it as there are not many TV movies I actually like. 8/10
(Review by Chase Lee)