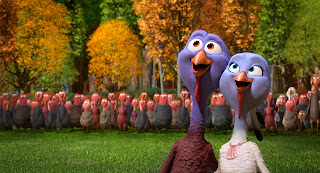 If your kids refuse to partake in your Thanksgiving turkey feast you can blame the new animated film Free Birds. Directed by Jimmy Hayward who also wrote the screenplay with Scott Mosier from a story by David I. Stern and John J. Strauss, the film tells the story of one particular bird who comes across the secret of why the farmer is fattening up the flock. Yes, young impressionable children will be thinking about those turkey's that were talking about their fate on someone's table.

Owen Wilson is voice of Reggie, a blue headed turkey that's a little different from the rest of the flock. According to Reggie, turkey's are dumb. They don't believe that all the corn the farmer feeds them is to make them ready for the dinner. When people gather at the farm, he gets the turkey's to hide in their shed. He thinks they are finally ready to listen to his warnings, instead they send him outside on this own. Fortune finds him when Reggie turns out to be the bird singled out for the annual presidential pardon. The presidents' daughter takes Reggie with her to Camp David where he's pampered, eating pizza and watching telenovelas. Later he meets turkey Jake (Woody Harrelson), the only member of the Turkeys Liberation Front. He's kidnaps Reggie to take him on a mission directed by the “great turkey” to go back in a time machine to change the first Thanksgiving and take turkey off the menu.

The time machine (voiced by George Takei) takes them back to the fort governed by Bradford (Dan Fogler). The settlers are hungry, and the Governor is trying to broker a deal with the Indians. Myles Standish (Colm Meaney) has been trying to hunt down the native turkeys in the area, but the flock lead by Chief Broadbeak (Keith David) are wise to them and keeps them away from their hide out. Reggie and Jake have to make their case to the flock who are not dumb birds as they become in the future. They are productive and prosperous not having been beaten down by a future of being someone's meal. Jenny (Amy Poehler) attracts Reggie. She's smart, snarky, and doesn't quite believe their story. Ranger (Jimmy Hayward), the chief's son, engages in machismo competition with Jake. Somehow they have to convince the colonial flock to attack the fort and stop dinner before Standish finds them.

This is another of those 3D films that could easily benefit without having to spend extra cash for those glasses. Truly if you do see this 2D it you will be saving yourself some money. The animation is well done enough, the colors reflect the perfect autumn movie. There's a little bit of violence and sacrifice that may effect the smaller ones. But overall, there's plenty of humor and girl power for everyone. Then of course, your kids may request pizza at Thanksgiving.
(Review by reesa)

Email ThisBlogThis!Share to TwitterShare to FacebookShare to Pinterest
Labels: Free