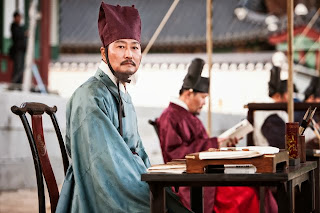 In recent years, South Korea has been producing if not the best movies in the world, then at least the most consistently interesting ones. And in the middle of a huge number of them (The Host, Sympathy for Mr. Vengeance, J.S.A.: Joint Security Area, Secret Sunshine) has been actor Song Kang-ho. So when The Face Reader, a new film starring Song, popped up as one of the AMC Grapevine Mills infrequent Korean film imports, I made a point to see it.

Song, for my money, is the best, most exciting actor in movies today, playing a vast array of characters across genres, from the slow-witted provincial police detective in the drama Memories of Murder, to the nutso gunman in the slam-bang adventure The Good, the Bad, the Weird, to the Confucian-scholar-turned-Korean-Babe-Ruth in the comedy YMCA Baseball Team. Even the occasional misfire, such as Thirst (as a Catholic priest who becomes a vampire) has at least been interesting. He reminds me a lot of Chow Yun-fat from 20 years ago, only with greater dramatic range.

The Face Reader offers a chance to see him in an impressively mounted costume drama set in the mid-15th century. He plays Nae-kyung, the down-on-his-luck son of a disgraced nobleman who has become an expert in the art of face-reading, a talent for determining people’s characters by evaluating their facial features, that, judging from the context of the movie, is about as highly regarded as palm-reading in this society. When a clever and enterprising madame (Kim Hye-su) sees a chance to use him to generate more revenue from her clientele, Nae-kyung and his guileless brother-in-law (Jo Jeong-seok) quickly agree, only to find themselves working long hours for little pay.

But word of Nae-kyung’s abilities spreads, and when he uses his talents to help a provincial official solve a murder case, he comes to the attention of the king himself. And thus he finds himself drawn into court intrigues, as a wily senior aide (Baek Yun-shik) tries to outmaneuver the dying king’s vicious and power-hungry brother (Lee Jung-jae) on the behalf of the king’s young heir.

The Face Reader, after beginning as a broad comedy, shifts inexorably into tragedy as Nae-kyung gets in way over his head in the politics of the day. But first-time screenwriter Kim Dong-hyuk and director Han Jae-rim manage to make the transition seem natural and seamless. And Song, of course, is more than up to the task of playing an emotionally complex character, being silly or pitiable as the situation may require.

In the end, The Face Reader may not be as daring as a lot of the Korean movies that make it over here, but it’s well-mounted, intelligent entertainment, and frankly, that’s more than most Hollywood fare can accomplish these days.
(Review by Scott Bowles)