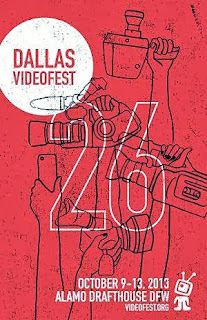 DALLAS, October 9, 2013 – Ever one to break with the tradition, Video Association of Dallas is proud to announce its Dallas VideoFest 26 winners prior to the screenings of the films. Tickets and passes still available for all at VideoFest.org.

“NATAN breaks new cinematic ground on many levels and is innovative both in subject matter and its eclectic stylistic approach. The film twists and turns its way through a complex story filled with powerful revelations.”
- Jurist, Ben Levin, professor of radio, television and film, UNT.

"I watched it as a judge, and then I watched it again because I liked it so much."
-Keith Alcorn, Animator and creator of JIMMY NEUTRON: BOY GENIUS


Shorts Winners
Winner: PEARL WAS HERE by Kate Marks
Honorable mention:
EVERY TUESDAY: A PORTRAIT OF THE NEW YORKER CARTOONIST by Rachel Loube

"I feel like PEARL really represents VideoFest. It's edgy, it's a great story, and it's experimental. It also fits some of the themes of the programming this year."
—Adam Donaghy, filmmaker, Aviation Cinemas

Experimental Winners
Winner: DUSTY STACKS OF MOM by Jodie Mack
Honorable mention:
LIE BACK AND ENJOY IT by Jessica Bardsley

“DUSTY STACKS OF MOM is not only a beautifully constructed portrait of the artist's mother, but also a haunting and politically charged dirge to the phenomenon of small, family-run businesses that were—at a particular moment in time—less about ‘the bottom line’ and more about the blood, sweat and passion that it took to operate such heart-felt enterprises.”
— Jurist, Bryan Konefsky, director, Experiments in Cinema; president, Basement Films; lecturer, Dept of Cinematic Arts, UNM; visiting lecturer, UCSC; board of advisors, Ann Arbor Film Festival


Winners of the Dallas VideoFest 26 Best Videos will all receive free software courtesy of Jungle Software.

About Dallas VideoFest 26:
VideoFest officially opens at Gilley’s in Dallas on Wednesday, Oct. 9. It moves to Alamo Drafthouse Cinema in Richardson Thursday, Oct. 10 and more than 140 screenings take place in Richardson until Sunday, Oct. 13.

VideoFest (VideoFest.org) is now the oldest and largest video festival in the United States and continues to garner critical and popular acclaim. VideoFest prides itself on bringing films to the theater that are rarely available to be seen anywhere else. Films like Experimental/Art Films, Animation, Narrative and Documentary Shorts as well as Documentary and Narrative Features and some hard-to-find Classic TV episodes and Classic Films are often in the mix.
D Magazine voted Dallas VideoFest Best Annual Festival. DVF’s Expanded Cinema program was voted 2012 Best Visual Art and 2013 Best Light Show by Dallas Observer. Video Association of Dallas (VAD) brings our community quality video programming such as the independent alternatives of VideoFest 26.


ABOUT VIDEO ASSOCIATION OF DALLAS
The mission of the Video Association is to promote an understanding of video as a creative medium and cultural force in our society, and to support and advance the work of Texas artists working in video and the electronic arts. The Video Association of Dallas (VAD) is a 501(c)(3) organization incorporated on April 25, 1989. It began in 1986 as a weekend event, “Video As A Creative Medium,” presented at the Dallas Museum of Art by independent curators Barton Weiss and John Held. That first event, which included two nights of video by selected local and national video artists, was a great popular success, which led to the founding of the Dallas Video Festival (DVF) in 1987. Video Association of Dallas also presents the 24 Hour Video Race, the Texas Show Tour, North Texas College Film Festival, Texas Independent Film Network screenings, Texas Fllmmakers Production Fund workshops, Three Star Cinema, and other programs throughout the year.