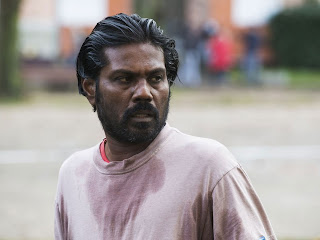 Opening:
This film won the Palme d’Or at Cannes last year so I was really looking forward to this one. I didn’t love it on that level but I really liked a lot. Let’s get reel and break this down.

Plot:
Dheepan is a Sri Lankan Tamil warrior who flees to France and ends up working as a caretaker outside Paris.

Pros:
The mystery of the story and the unknown is really compelling and the emotional weight of three strangers becoming a close family is engaging to say the least. The themes of the horror of humanity are throughout and really puts a perspective on no matter where you are you can’t escape it. It’s an emotional roller coaster between the main character and his struggle to move on from the wars of his homeland and start a relationship with his fake family. I also noticed this film has elements of romance, suspense, drama, and action; a true crock-pot of everything. I don’t want to say too much because I think people should go into this blind but I think I gave enough information to go off of.

Cons:
Maybe, the criminals introduced are a bit underused but that didn’t bother me too much since this is ultimately about Dheepan and his family.

Pros:
Everyone does a great job and really brings emotional weight when it’s needed or a bit of levity while the darkness of the world is around them.

Pros:
The grounded hand-cam feel provides a gritty realism that puts you in the fray with these characters. The color also adds that extra layer of realism as the actors feel like real people going through this situation.

Pros:
The cloud of mystery and intrigued fuels this movie and never has a dull moment. The film even opens on powerful imagery to capture the entire tone of the film. For being almost two hours, I was never bored.

Overall:
Without saying much, I can say this is a great emotional family movie of three strangers who pretend to be a family among the horrors they face no matter where they go and just survive in this crazy world.

Posted by Dallas Movie Screenings at 10:50 AM