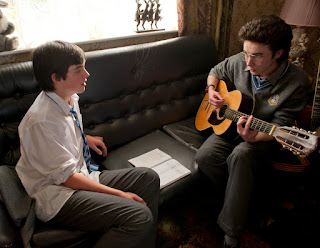 Sing Street written by John Carney’s (Once, Begin Again), reminds us of a time when discovering your inner talent was something that was made of from your dreams. Take Conor (Ferdia Wals-Peelo) a young 14-year old boy who breaks from his ordinary day life when he realizes that he wants to create his own band. Beating the odds, he does what his brother could never do to go after his dreams, no matter how much he went through. But it does not come easy. He gets bullied by a students, picked on by the teacher but no matter what, no one can sidetrack his dreams of starting his own rock band. Meeting new friends who sees his vision is a start if it helps to avoid dealing with his strange but unorthodox parents who are in the middle of splitting up.

Meeting the beautiful but sassy and cool Raphina (Lucy Boynton) who seems to be a bit out of his league, he tries to impress her by having her to star in his music video. But there just one bit of a problem. He doesn’t have a band. He doesn’t have music and he doesn’t have friends. But Raphina agrees to star in his first music video if he can get it started. Conor set out to find other guys who has similar interest in forming a really, cool band. He recruits five other guys by putting a flyer up on the school wall. They name themselves the Singstreet and Conor adopts the name “Cosmo" given to him by Raphina who says he needs a rock and roll name. He soon discovers that having a band is more work than that he ever admitted. He needs to create music. His brother helped him to discover his true writing ability by plugging him in to his record collection. Conor find his ability to sing, write, plays, which makes him the coolest guy around. Everyone wants a piece of him. He creates cool songs which are influenced by the craziness of his life. With each new musical experiment he also changes his fashion template that reflects the 80's "futurist band" type.

I like the fact that each character was able to contribute to the storyline. This was a cool movie because deep down Cosmo figured out what was missing in his life. His older brother, who was still trying to find his own identity and through Cosmo finally figures it out. This movie reminds me of an older version of high school musical, with lots of great songs, lots of funny moments and is full of anticipated great music. However, the storyline is very predictable but still very entertaining. This movie is worth seeing if you enjoy lots of good and original music.
(Review by Dr. Dwanna Swan-Ary)

Posted by Dallas Movie Screenings at 5:16 AM