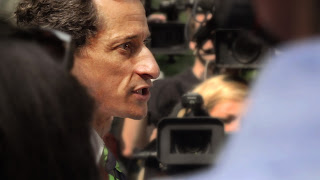 This highly entertaining and fantastic documentary follows former Congressman Anthony Weiner as he makes a race for Mayor of New York. The sexting scandal that he was involved with comes to light as something that greatly hinders Weiner’s political life. This man during his time in office fought immensely hard for the middle class and the low-income. I thought it was a jolting but brilliant choice to open the film with Weiner yelling in a Congressional hearing. It was incredible to see a Democratic Congressman not trying to be polite and getting so passionate about his constituents in Washington. That beginning clip grasped my attention from the spot.

As the film progresses, Weiner’s personal life comes onto center stage in front of everyone to see and it causes chaos. Weiner’s reputation and what he had fought on is ignored by the media and instead he is berated by questions asking about his mistakes. He says to the interviewer early on “Did I tell the truth or did I tell a lie?” He does this in order to be upfront about what he did. This whole explosion takes a great toll on his wife, Huma, who’s trying to forgive Anthony and fight for him to get back into office.

I thought this film took great actions in trying to cover every inner event that Weiner and his team had to fight through. It all happened, from having donors question and criticize Weiner over the phone to having people hurl insults at him to his face. There is a scene that is the epitome of Weiner’s turmoil that is occurring because of his celebrity status. He’s riding a bike on the street and a woman asks why the camera guy is filming him. He then states he doesn’t know and then another man recognizes him and says his name out loud. Yes, this scene was pretty funny but one has to feel sorry for the politician.

He’s trying to get through challenges that are popping up all around him. Weiner is shown to feel tackled by reporters and that is rightfully so as there are constant flashes in his face. His child at one point is even blockaded by one reporter who says “One more question.” I thought that this documentary was more trying to show the toll that this media frenzy took on his family than it was trying to be funny. People in the audience laughed a lot but I tried to look past the mockery. I tried to look into Weiner as a fighter for those less fortunate and I thought the film took great lengths into explaining Anthony. I was extremely glad that I watched it.
(Review by Wyatt Head)