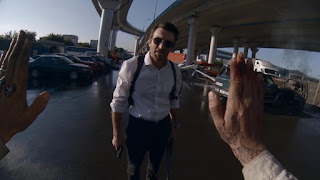 Opening:
This movie is insane, bloody, brutal, stupid, fun, balls-to-the-wall ridiculous. This isn’t for everyone, but if you are an adrenaline or action film junkie, you might get a kick out of it. Let’s get reel and break this down.

Plot:
A first-person action film from the eyes of Henry, who's resurrected from death with no memory. He must discover his identity and save his wife from a warlord with a plan to bio-engineer soldiers.

Pros:
The director creates some visually appealing and visceral action and really immerses you into the film going experience. Nothing was held back and the violence is over-the-top, but at least it fuels the enjoyment of it without it slowing down too much. The creativity of the violence and action deserves some recognition.

Cons:
The story and characters are one-dimensional and nothing is ever explored. With how over-the-top this film is, I am surprised they didn’t go all out for the story as well. But let’s face it, you go see this movie for the action.

Pros:
Listen, this is not an Oscar worthy movie filled with mesmerizing performances but the actors look like they are having fun and I can’t fault them for that. That’s as far as I will go with the acting…they looked like they were having fun.

Pros:
The POV style of the film has inventive cinematography providing the immersive experience mixed with brilliant choreography and effects. There are some scenes that will have your jaw dropped and, as a filmmaker like myself, perplexed on how they did it.

Cons:
With all that said, sometimes the POV style can get in the way of the action and become too shaky and muddy. If you do not like “found footage” films, you will hate this one.

Pros:
With the hardcore action, you see what I just did there, the pace of the film is aggressive with its viewers and keeps you engaged…or throwing up because of motion sickness. The blend of practical and computer generated effects were really amazing and almost had the flavor of a movie made in the 80’s.

Cons:
The style of the film could turn people off making the movie really slow. There were a few spots where it felt a bit slow to me but it would immediately pick back up again. It truly is non-stop action, think Mad Max: Fury Road on steroids, and of course, a cheesier, over-the-top downgrade.

Overall:
This is a theater experience. Will I watch this again? No, probably not, but I did enjoy myself and I had fun for the most part.