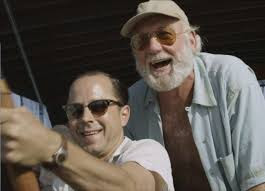 As the first Hollywood film shoot in Cuba since 1959, it helps that country has been in a time warp and unchanged for this biographical story. Journalist Denne Bart Petitcler had written the screenplay and started working on the production of the film at the time of his death in 2006. Based on his friendship with Ernest Hemingway, Peictler tells how the famous writer helped him find his literary voice amidst the Cuban Revolution and a few month before Papa commits suicide. Directed by Bob Yari, the film makes little use of the beauty of the country confining most actions inside Finca Vigía, the large home where Heminway lived and is now a museum.

Giovanni Ribisi plays Ed Myers (name change by Denne Bart Petitcler), a Miami reporter in the late 1950's. He has written letters to his Hemingway(Adrian Sparks) to explain how his books has gotten him out of a troubled childhood and led him to his current career. He never mails them. He is unaware that his latest letter is read by his girlfriend Debbie (Minka Kelly) who mails it. So it is a big surprise when he gets a phone call from Hemingway telling him it's a good letter and does he want to go fishing. Thus begins a series of weekend jaunts to Cuba as Ed and Papa develop a father/son bond. Joely Richardson plays Hemingway's fourth wife Mary who Ed walks in on while she is swimming in the nude.

The famous writer is usually surrounded by fans when he's in public. So they rarely leave their home and Papa plays host to dinner parties with other literary friends and doling out wisdom and mentorship to Ed. But in his office he stares at the blank page in his typewriter, playing with his gun, drinking too much, ranting to his demons. His put upon wife had given up her own career as a journalist, is getting frustrated by lack of affection and impotence. Meanwhile, Fidel Castro rebels are having a shoot out with soldiers of the Fulgencio Batista government. Ed, who covered the Korean War, is dragged to the middle of the action by Papa. Ed comes back to Miami to write about war in Cuba, and the FBI comes to ask him to report on Hemingway's political standings on this issue.

The last subplot of why the FBI has targeted Hemingway is pretty much the only interesting action of the film. There are some interventions by Mary, Ed and poet Evan Shipman (Shaun Toub) to keep from Hemingway giving in to ending his life and some mysterious friends of Hemingway getting killed by government. The film is pretty slow and laborious. Sparks does a good job as Papa, and Ribisi does well as someone over his head involved in a bigger than life personage. The best parts are the period cars featured, which auto aficionados are anxious to head to Cuba to obtain.
(Review by reesa)