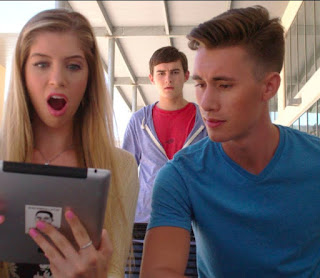 Opening:
This is definitely the most unique film I have seen at the festival but I will say it has a certain charm about it that does keep a smile on your face. Let’s et reel and break this down.

Plot:
Freshman Neil's Vanguard stories are all he cares about...until he meets the older Julia, who pushes him to put his own fan fic online. When the website's moderator takes a special interest in Neil's work, it opens up a whole new universe.

Pros:
The director creates a fun movie with a surprisingly large amount of depth and heart. The story is fresh and gives us as an audience a 101 guide to fan fiction culture. The two leads provide a lot of chemistry with some mystery with their character’s traits and that keeps an amount of surprise throughout.

Cons:
There is a lot of humor and a lot of drama but only half of it works for me. Some of the dramas hit well and is delivered with ease, and some of the drama is jagged and feels forced. Same thing goes with humor, some of it hits and some falls flat. Some of the supporting characters felt unnecessary and could have been taken out or given a bit more screen time.

Pros:
I believed the chemistry from the two leads and the relationship that blossomed between them. They were extremely likeable and complex as individuals in high schools, which I appreciated. A few of the bigger celebrity roles provide a large amount of humor and levity

Cons:
Like I said above, some of the supporting characters are unnecessary and some deliver flat performances.

Pros:
You can tell this is a low budget film and it is filmed with a sense of cheesiness and goofiness with the sci-fi fantasy scenes and a nice warm feeling with the characters. But overall the cinematography is fine.

Cons:
With its low budget, there were a few shots that looked really low definition but I can’t fault them for that.

Pros:
The costumes and props for the fan fiction scenes are filled with imagination that reflects the main character and are fun to watch. For the most part, the story is structured well enough to keep your attention until the very end.

Cons:
At some points, it feels a bit longer than it should but the 100-minute runtime is good enough for the story.

Overall:
The sense of charm and likeability is very addicting even though some of the drama and humor doesn’t work for me. I won’t see this movie again but I will still say you should check it out if you want something new in your movie viewing life.