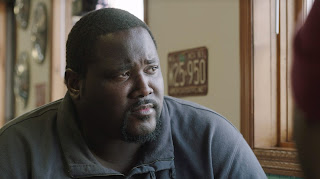 This calm but striking drama follows a man named Byron as he tries to fix his life. Just getting out of prison, Byron goes to work on a farm for his Aunt Beth as a repayment to his stepbrother. His lawyer stepbrother, Josh, helped set him free and therefore feels entitled. Quinton Aaron, who plays Byron, brings such a kind but troubled personality to the role. He is trying to work well in his new surroundings but has a difficult time getting adjusted. He beautifully portrays somebody who's just trying to do the right thing.

The film really did well in explaining how the world can be against somebody who got caught up in some muddy waters. We as an audience feel the uncertainty of this new venture for Byron as soon as he steps off the bus. We can see the rural surroundings and potential disregard for a black person to be in that town. You feel the distance Aaron's character is from home and his pain in the early parts of the film. There is a scene where a young girl asks Byron if he was in jail while he looks down at his first plate of dinner with the family. One could feel the uncomfortable vibe and possible shame that the character felt. The scene paints a picture of the environment that Byron has to break while on the farm.

One of the things that I loved about this story was how it was a different kind of ex-prisoner tale. There were relationships built and improved among the relatives that formed a feeling in me to hope for the best in Byron. He doesn’t want to go back and get involved in crime. The farm experiences financial difficulty in the film which created a sense of compassion for the family. I know that similar circumstances do occur in life with any business and how troubling it can be to one’s conscience. We see the stress that it puts on Aunt Beth while she's trying to still take care of her children and her farm.

Halfway was a completely serious film that tested the human sense of security and caring. I thought the screenplay was sophisticated and well-planned in order to cover all meaningful facets of a similar happening in life. Writer and Director, Ben Caird, certainly did not waste anyone's time with this quiet and emotionally touching film.
(Review by Wyatt Head)