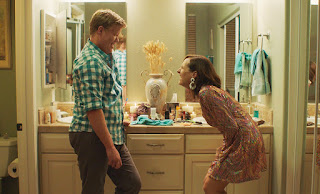 Opening:
Get your tissues because your tear ducts are going into overdrive. Let’s get reel and break this down.

Plot:
A struggling comedy writer, fresh off a breakup and in the midst of the worst year of his life, returns to Sacramento to care for his dying mother.

Pros:
The emotional pull will give anyone a run for their money if you think won’t at least get misty-eyed while watching this. The grounded realistic tone will connect to anyone who has gone through a horrific situation such as this. Despite the core of film being a mother with cancer, the other family members are just as complex and interesting as the story advances. You begin to feel an instant connection as soon as they come on screen and that has to do with the acting as well. For a first time feature writer and director, Chris Kelly nailed it and I can’t wait to see what he does next.

Cons:
The story might seem simplistic to some people but the execution is flawless.

Pros:
This is where the movie shines the most. Molly Shannon and Jesse Plemons add so much heart and depth to this movie that is absolutely incredible to witness since both are more known for comedy or dark comedy. Their performances are very tender and human. The supporting cast does very well and the other family members add layers to the story.Plemons and/or Shannon need to be nominated for something.

Pros:
It’s a well-shot movie and the handy-cam feel adds to the realism. This isn’t a film to go to see for the cinematography but its solid.

Pros:
The emotional investment that I experienced made the movie fly by very fast and there was no drag to it. The family is so likeable that I wanted to hangout with them more.

Cons:
If emotional weight of someone experiencing cancer doesn’t appeal to you then you probably won’t like the film or find it boring.

Overall:
The story maybe simple but the emotional weight is very palpable and delivered so well with the strong acting and themes. This is one of my favorites of the Dallas International Film Festival.

Grade: A
(Review by Chase Lee)