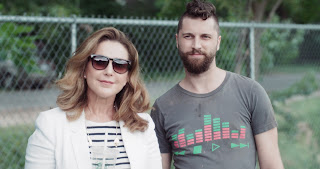 This small budget film had its moments. It had its character reforms, its contrasts, and its relationships. The story follows an ex-Occupy Wall Street protester who goes from sleeping on the streets of NYC to being back in his hometown. The hometown is Dallas, Texas and this man, named Beau, is in charge of taking care of his two younger sisters who have lived an upper class life. I felt that the story had been done before a little bit. There were some great "cool skater dude" lines that Beau being the older brother connects with his younger sisters. Beyond that, I wasn't taken by the heart when the actual important story changes occur. It felt as if the script for Beau didn’t have enough significant moments for him to grow.

I did appreciate, as anyone would, seeing their hometown filmed on location. It reminded me of the different parts of my childhood throughout the city. The team filmed the skyline, Valley View Mall, and in an actual Dallas school among other things. Some scenes were well done like when Arden, Beau's youngest sister, says "I'm your sister" to Beau after years of not seeing him. That scene made one understand from early on how much the character had missed from his life at home. One can feel a great sense of being in cold water as him being back home is a shock to him.

Beau is a person who doesn't care at all where he is and what is appropriate in the circumstances. He walks into his estate lawyer's office with a torn shirt and rough shorts. I think this is what people find attractive about his character in that he's not trying to be proper in conforming to demands. He’s got that rocker look and when he’s found in the first scene of the film you get why he was sleeping on the street.

This is a story about transformation that I think could have been more strong in its convictions. There could have been more instances where see Beau realize more fully what the facts are and how to handle them. I am not the writer of course. Gene Gallerano, the writer, worked very hard to make this film into a reality and I appreciate that as a film goer. It had good comedic moments. At the end I wasn't really there and feeling like I wrapped up an engaging story.
(Review by Wyatt Head)