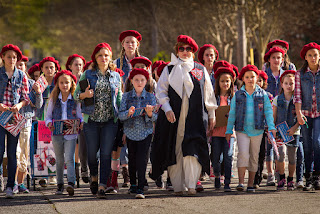 Melissa McCarthy has created a niche in the world of women's comedic acting that is one of a kind. No matter what kind a character she plays, she always makes you care for that person. Her latest role directed by her husband Ben Falcone who also co-wrote with McCarthy and Steve Mallory, she takes on a really unlikable person, which you end up rooting for her in the end. Based on one of her old Groundlings character and a little of Martha Stewart, Michelle Darnell is a business mogul and motivational speaker who gets busted for insider trading. There are some laughs, some really raunchy humor, some mean humor and a very uneven story with a lot of slapstick.

Michelle's childhood is spent being adopted and returned a few times until she decides that families are really not important and she will rise to the top no matter what. As an adult she was clawed her way to becoming the number on CEO in the world, who garners gushing fans, but leaving business associates in the dust. Her assistant is Claire (Kristen Bell) who gets a pair of expensive earrings that Michelle is wearing at the time as a raise after 3 years without one. Renault (Peter Dinklage) is a former boyfriend when he was Ronald who wants to ruin Michelle after she was once promoted over him when they were younger. He causes her to be arrested for insider trading and she is set away for five months. Meanwhile all her assets are frozen and seized and Renault takes over her business. When she gets out of prison, she has no where to go, ending up on Claire's couch while she figures out what to do.

Michelle is not really a nice person, tends to use people and alienate everyone. Claire's daughter Rachel (Ella Anderson) is the only one who feels some sympathy for her. Claire tells Michelle to get off the couch and help around the house. Like taking Rachel to her Dandelion (sort of like Girl Scouts) meeting where Michelle find out their cookie sales. Thus begins Michelle's planned comeback to the top when she figures out a way to market Claire's brownies by creating a new “club”, the Darnell's Darlings, who will sell the brownies and earn a profit for themselves and thanks to Claire, money for their education. The Darlings now dressed like 60's communists are trained to be a hard sell army, but they become successful, causing Renault to try and take it away.

There are some questionable moments like when the Dandelions and Darlings have a street brawl. Or when Michelle has a sword fight with Renault, or when Michelle discusses Claire's choice of bras. Lots of silliness, some emotional catharsis, and Kathy Bates for about a minute. It will no likely bring crowds to the theaters with nothing else really opening. It's a good hour and half of forgettable distraction.
(Review by reesa)

Email ThisBlogThis!Share to TwitterShare to FacebookShare to Pinterest
Labels: The Boss review