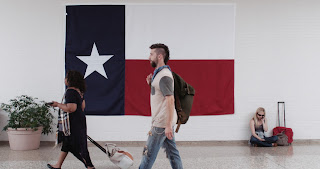 Opening:
I am all for Texas filmmaking and locally made films and all, but they need to be good and not feel like my senior thesis film from college. Let’s get reel and break this down.

Plot:
After 7 years away from home and news of his parents' death, a disillusioned Occupier is forced from his tent in Zuccotti Park to upper-middle class Texas, where he must repair his two teenage sisters, his past, and himself.

Pros:
Technically, it is a well-made film with cameras that shoot gorgeous images and a complete narrative. However…

Cons:
…this is where most of it falls apart for me. First, the story is thin and doesn’t really go anywhere. I don’t mind movies about relationships between siblings but I didn’t find any emotional attachment between them so it looked like actors going through the motions. Speaking of that, secondly, there is no emotional weight and when there was character development or emotional “depth” the acting came across as flat and took me out of the story. Third, the humor completely missed all marks for me. My audience was laughing but it felt forced and, most importantly, humorless.

Pros:
Lorelei Linklater was convincing in quieter scenes but when it got to the more dramatic and serious scenes…

Pros:
It is a well-shot film with some great shots of Dallas creating that warm and big feeling that Dallas possess.

Cons:
Some shots have the characters swaying in and out of focus and that is noticeable but not a deterrent of the film.

Pros:
As a narrative it flows well, but my gripes are from a personal standpoint.

Cons:
The lack of interest of the characters or the one-note acting makes the film a chore to sit through.

Overall:
I know I will get a bunch of hate for disliking this movie but I am willing to accept it. Listen, making a film is hard. I have done it myself even though it’s a crappy film I am still proud of it and that I finished it, and these filmmakers should be proud of their product. For me, it didn’t click and that’s ok because I know other people, in the audience I was in, enjoyed it and that’s the power of film.