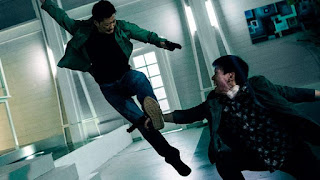 Opening:
I saw this late at night and it was the perfect action film to where I could just get lost in the choreography and enjoy myself. Let’s get reel and break this down.

Plot:
Undercover cop Kit becomes a junkie in order to catch Mr Hung, the mastermind behind a crime syndicate. When the operation goes sour and Kit blows his cover, his supervisor and uncle Wah decides to terminate the operation. When Kit disappears without a trace, Wah defies the order from his commanding officer and tracks Kit to a prison in Thailand. Thai Police officer Chai becomes a prison guard in order to raise money for his daughter who has leukemia. He's assigned to keep an eye on Kit. Even though Chai and Kit are in opposing positions and they don't speak a common language, Kit turns out to be a suitable bone marrow donor who can save Chai's daughter. While Chai is determined to keep Kit alive, the warden Ko wants him dead to ensure the smooth operation of the prison, which is the front for Mr Hung's organ trafficking business. Mr Hung shows up in Thailand so he can use his younger brother's heart in a heart transplant to save his own life. The stage is set for a showdown...

Pros:
The action scenes are handled with grace and intensity and were a joy to watch. I absolutely loved the brutal nature of the violence and it had a gruesome, beautiful quality to it. Some of the dramatic scenes are really well-handled but…

Cons:
…they do not mash well with the “sometimes “ over-the-top violent and cheesy scenes. It was a bit jarring for the story, even though I appreciate the story since the tone, for the most part, is consistent in the corny 90’s atmosphere. With that, there is also a lot happening in the story (I mean just look at the plot above) and can also become a bit jumbled. The other thing that bothered me, even though I loved it, was the inconsistency in the martial arts style. The styles I have seen in martial arts film are the Crouching Tiger, Hidden Dragon anti-gravity heavy fighting versus The Raid with it’s grounded, bone-crunching fighting. For the majority, the film has the grounded style but would, occasionally, do the anti-gravity style and kind of takes you out of the scene. But honestly, that doesn’t distract me from the movie, just an observation.

Pros:
I never saw the first Kill Zone but I hear Donnie Yen is pretty dang awesome. Tony Jaa is good in the sequel and has a lot of great moments within the action and his relationship with his daughter. I believed every moment he was on screen. Everyone else also kills it and the character of the warden is the calmest but most intimidating boss I have seen in a film in a long time

Pros:
The action looks amazing with the colorful and eye-catching backgrounds in which these scenes are harbored. Everything else is also shot well and there is always interesting shot choices. Also, there is one very cool one-shot fight scene that is jaw dropping with knowing how many extras that action director had to coordinate.

Pros:
The film overall has a fast rhythm that is palpable and a lot of fun to watch. But…

Cons:
…there is a lot in this film, in terms of plot, carrying it out to a two-hour runtime. It can feel long and it should have been cut down by at least twenty minutes to make a tighter story.

Overall:
As my first Hong Kong film, this was a lot of fun even though it is a bloated story. The martial arts is great to watch and, after this, just makes me realize I would like to watch more movies from Hong Kong and this genre in general.