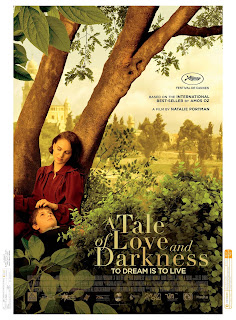 Opening:
As Natalie Portman’s directorial debut, I found a lot of great things going on but ultimately fell short. Let’s get reel and break this down.

Plot:
A drama based on the memoir of Amos Oz, a writer, journalist, and advocate of a two-state solution to the Israeli-Palestinian conflict.

Pros:
Natalie Portman does do a great job as a first time director creating a movie with some powerful moments and interesting cinematography. The story is told through fragmented memories from an older Amos about his parents and their marriage with Israel and the conflict of the Jews and Arabs as the backdrop. I like the concept of broken memories being recalled to tell a narrative, because it does work in this film, but…

Cons:
..I wish the conflict of Israel were the forefront more than the marriage. Natalie Portman’s character is very dower and her depression is warranted but not to this extreme and it was frustratingly exhausting. The husband was also likeable until the end so it was a chore to watch sometimes and making it longer than it should’ve been.

Pros:
Despite the story, everyone was good and delivered in their performances. That’s pretty much all I can say for this one.

Pros:
Beautiful, yet haunting imagery is at the forefront and definitely provides a tone throughout. From the golden glow in the happier scenes to the dark, intense shadows of the sadder scenes, this has some well-lit and pretty cinematography.

Pros:
For an hour and half, it does hold my interest…

Cons:
…but as the movie progresses you get frustrated with Portman’s character making it run at a snail’s pace. The ending of the film is interesting but also leaves you with an empty anti-climatic feeling in your stomach.

Overall:
If this movie teaches me anything, Portman has put herself on my radar of filmmakers to watch out for. This is a good start to hopefully a long directing career.

Email ThisBlogThis!Share to TwitterShare to FacebookShare to Pinterest
Labels: #DIFF2016, A Tale of Love and Darkness review, Chase Lee