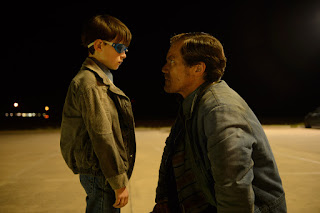 Director /writer Jeff Nichols fourth feature film and first studio production was selected to compete for the Golden Bear at the 66th Berlin International Film Festival. It's a taut science fiction thriller that is reminiscent of E.T. the Extraterrestrial and Close Encounters of the Third Kind. But it stands on it's own in that special niche of films that will reach cult status. It's also about families and their bonds and acceptance, while hitting the typical bad government guys and militant religious cultists perusing them.

The movie starts out with two men covering windows with cardboard and duct tape while a little boy is under the sheets wearing blue goggles and head phones. The television news is filled with stories about the kidnapping of an 8 year old boy Alton (Jaeden Lieberher) by his father Roy (Michael Shannon). The audience is given little information that is gradually revealed as the plot moves the players in place. The religious compound run by Calvin Meyer (Sam Shepard) is also looking for Alton sending out his hench men to bring him back. Their religious service is interrupted by FBI agents who gather the ranch occupants into buses where they are sorted by age and sex and asked to fill out questionnaires. Questions relating to their own involvement with Alton. Turns out that Calvin is Alton's adoptive parent. The FBI hold him while investigating why Calvin's ranch is stock piling weapons. The NSA nerd analyst Paul Sevier (Adam Driver) interviews the ranch members about Alton's supernatural abilities. Calvin tells Paul that the church's sermons and dates are based on Alton's speaking in tongues which they believe are prophecies. Paul tells him that numbers are encoded with secret government information communicated by satellites. On their way to meet with Alton's mother Sarah (Kristen Dunst), Roy and his childhood friend State Trooper Lucas (Joel Edgerton) change cars a couple times, meeting with an ex-church member which doesn't turn out well. At a gas station stop, Alton uses his power to take down a satellite because he tells the adults that they are being watched. Alton is getting weaker. He tells Roy that he needs to be in the sunlight. That's when things start to get really good.

So without giving too much away, the film is a satisfying story that doesn't dumb things down and creates very human characters. The science concept is interesting although it's not necessary to actually “get it” to enjoy the adventure. Michael Shannon has always played intense people, in this he is a bit subdued but heartbreakingly tender. Adam Driver adds a comic touch to his nerdy newbie who is totally fascinated by Alton's abilities. Edgerton and Dunst add a bit of heroism to the emotionally unexpected moments. This is one film that will leave you thinking about it even after the credits roll.
(Review by reesa)