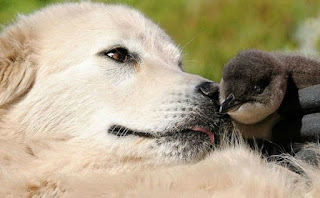 This feel good family film entertains with the story of a dog, Oddball, who begins protecting penguins on an island in Australia. He is their guarding against the evil foxes who keep on attacking the population of penguins. Swampy and his granddaughter, Olivia, try to salvage Olivia’s mother’s job by using Oddball to keep the penguin number steady on the island. I thought that this story about family working together was a cozy one. The relationship Swampy has with his family and the way he is brings warm feelings to the audience. Swampy is sort of like the father anybody has ever wanted because of his innocence and kindness.

His dog, Oddball, although a trouble starter, is consistently loved and forgiven by his owner. The fact that this dog was so handsome and adorable made his role as the hero all the more exciting. The small town in Australia where this story takes place is a quaint seaside town that makes people feel at home. Coco Jack Gillies, who plays Olivia, gives a mature and spot on performance as an adventurous child. This film is based on a true story which I think is another great feat for making dogs the rescuers of dilemmas.

One gets the feeling of the town being small in that everybody knows each other. That type of backdrop makes for a purposeful family film because the characters try to get along. I did like the characters in total including the dog but I felt that the story wasn’t exceptionally strong. Yes, it is impressive what happened but the details seemed too simple. The film almost felt like it went too quickly for my taste. I thought that the film was really aimed at very young children and it didn’t have too much meaning in its message.

There were some pretty shots though. There were some in the beginning that had the waves of the ocean overlapping one another as the camera came closer to the island. The opening credits are displayed in a sense of bliss and light air. There was a cute introduction clip where Oddball gets a shower and then shakes off the water creating a radial spray that gets onto Swampy’s face. The dog scenes I have to say made me want to cuddle the big teddy bear of a canine. I know that sounds a little childish of me but don’t judge because it is a family film. Oddball was an adorable story that maybe needed a bit more detail to it.
(Review by Wyatt Head)